How it can make your D&amp;D campaign better

The Evil Dead film series is a collection of [arguably] loosely-connected horror movies (and a TV show and comics...) that helped define both modern horror and modern fantasy. If you have never seen the original masterpieces of cinema (Evil Dead, Evil Dead 2, and Army of Darkness), then you should go watch them right now. If you have seen them, you should go re-watch them now. And once you've done that, you should reflect upon them, because they can make your D&D game better.

There are lots of lessons to be learned from the Evil Dead franchise, but here are 6 things to get you started.

Few things in the Evil Dead movies go to battle without taunting between turns. Whether the Ash, the hero of the movies, is being attacked by a zombie (a deadite to fans), bludgeoned by animated furniture, or jumped by a demon, his enemy is constantly laughing or jeering at him. That's what your villainous NPCs and monsters ought to be doing to your party. It might not fit the flavour of your setting to have your baddies make wisecracks between attacks, but they can at least interact with the heroes on some level. It might seem unnatural in real life, but it happens in every movie, and it turns what would otherwise be the rote dance of combat into a genuinely interesting interaction. Have your adventure's villains talk during combat. Reveal something about their personality or motivation. It makes for a more interesting battle, it keeps combat from becoming nothing but a math exercise, and it just might get under your players' skin. 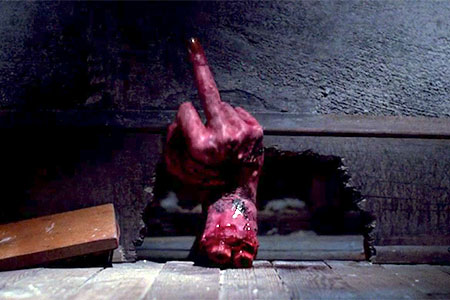 2. Everything is your enemy

In the Evil Dead series, everything attacks Ash and his friends. Things that have attacked Ash: mirrors, rocking chairs, doors, trees, dead bodies, demons, skeletons, a bridge (in a way), the air, an extra-planar vortex, a witch, peasants, heck even Ash's own hand.

D&D has rules, so you can't fairly have random objects attack your players without rationale or stats. However, you can always re-skin monsters that have stats to allow for surprising turns of events in a battle. Furthermore, you can start encounters with one or two of your monsters, and then introduce more as the encounter progresses; imagine a scenario that starts with one monster and ends with two previously innocent by-standers and one mule turned monstrous.

Guns in a fantasy setting are scary. They're not a natural fit, they have severe real-world associations, and for whatever reason surviving a magical fireball to the face makes sense to players but surviving a bullet doesn't. But in Army of Darkness, Ash brings a boomstick to a medieval world and, while it helps him against a variety of witches and demons and primitive screwhead peasants, it only goes so far. A gun in a fantasy world is just another magical device, with the same chance of success or failure as any other magical attack. Theme it however you need to theme it, explain it with whatever mystical back story necessary, but don't be afraid when a player brings a gunslinger to your table.

The name of the original movie and the franchise kind of says it all. In the Evil Dead, nothing stays dead for long, but everything stays evil. In D&D, a dead NPC or a dead PC that doesn't come back to life as an evil nemesis is a carcass wasted. 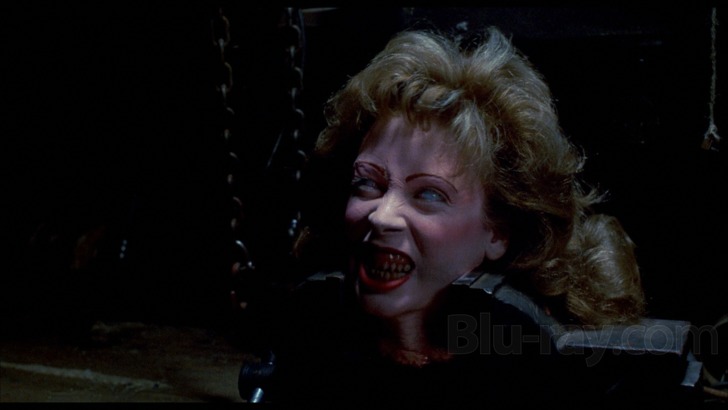 Nothing evil tells the truth. The undead monsters attacking Ash try to catch him off guard by telling him that they've been restored to health and sanity, that they defeated the evil within them. And when Ash starts to believe them, they attack with twice the ferocity.

6. Everything is a weapon

In D&D, the monk class has the unique ability to wield anything as a weapon without penalty. Not all of your villains are likely to be monks, but when they have nothing to lose, they should use anything and everything at their disposal, penalty to attacks or not A frantic barrage of attacks using everything in the area that isn't nailed down makes a fight scary, dangerous, and desperate.

There are lots of great lessons to be learned from the Evil Dead series. Watch them often, take notes, and steal as much as you can. At worst, your game will be more fun, and at worst you'll have seen Evil Dead a few more times.