Finally, a proper opening! Instead of the cheerful explanation of what a secret agent is, this episode starts with the beginning sequence I recall seeing when I first watched this series: Napoleon Solo appears in frame, shots are fired, but he's impervious because he is...the man from UNCLE.

I'd predicted it as early as episode 2 and was thankfully incorrect, but this is the episode that delivers the inevitable look-alike plot. An imposter Solo is engineered by THRUSH, through drastic plastic surgery and body modification. I have to admit that of all duplicate-hero episodes, this setep was pretty good, because the series has already set up that impossible feats through science are a reality in this world. So we don't have to endure a setup where an exact match of Solo is found in a remote kingdom of Carpania and is quickly assigned to espionage by THRUSH. Instead, we start with an experienced THRUSH agent being operated on by experienced scientists who modify facial structure and even vocal chords to arrive at an exact match. I still wonder about the study and training you'd have to do on a secret agent to be able to blend in perfectly with his colleagues, but it didn't take too long for me to accept what's really a tired and rather silly premise.

Premise aside, this is actually a good episode. I don't think the body double angle was actually necessary, interestingly. The fact that Solo has been replaced amounts to nothing, in the end. The MacGuffin of the episode is a briefcase containing super-sciency stuff that must be delivered to a high security underground government base. The fact that Solo isn't himself culminates in a briefcase switcheroo that frankly isn't so well executed that it relied on Solo being fake. I think the story could have invented a far more elegant switch that could have happened to the real Solo, rather than by a fake Solo, and the story could have progressed mostly in the same way.

The actual genius plot element of this episode isn't the duplicate Solo, it's the airline stewardess who Solo takes to dinner at the start of the episode. Sandy, played by guest star Sharon Farrell, is the first person effected by Solo's switch, because the body double doesn't know Sandy because she's too recent a romance to have studied up on.

She doesn't know it, but she's the only one in the episode who notices that Solo isn't quite Solo, and purely out of spite, she nearly foils all of THRUSH's evil plans. 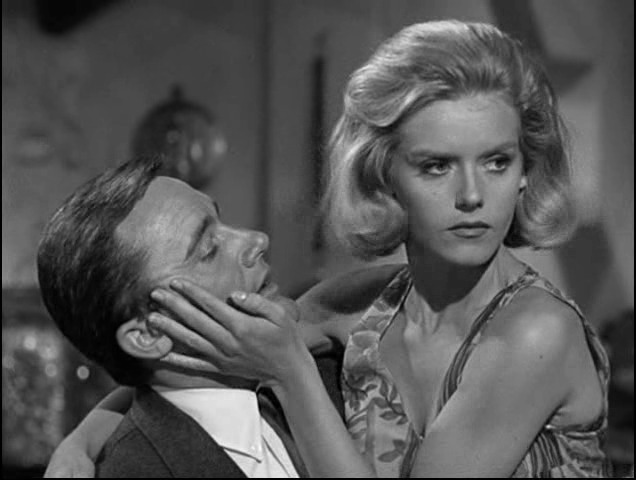 She plays the role of an ordinary citizen recruited by UNCLE to save the world, although in this case she's not recruited by UNCLE. It's a play on the standard formula that works brilliantly, but it's badly under-utilized, as it mostly causes inconvenience and ultimately leads to nothing.

The other leading lady of this episode is Serena, played by Senta Berger. She's a THRUSH "freelancer" with allegiance to no one but herself. She also has an on-again off-again romance with Solo. If this sounds familiar, it's because Angelique (played by Janine Gray) in Deadly Games Affair was practically the exact same character. 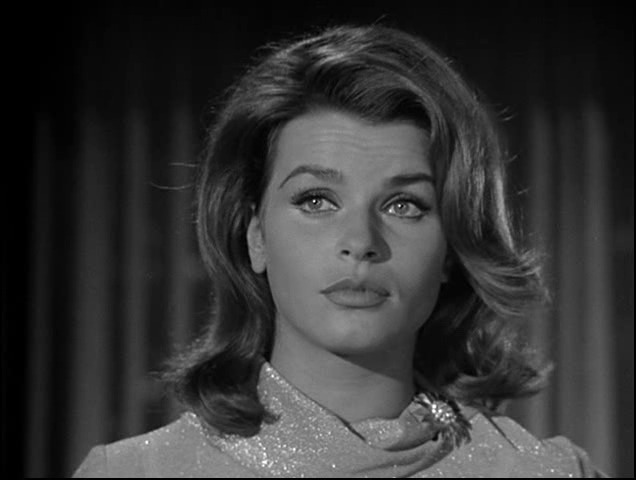 Serena Angelique is as good a character here as she was in Deadly Games, with no loyalties to anyone but herself and the softest of spots for Solo. If there is a pay-off for the body double plot, it's when Serena intentionally kills the double in favour of the real thing.

This episode isn't nearly as bad as I would expect for a body double episode, but it has problems.

The MacGuffin swap is clumsy. Evil Solo even loses a button in the briefcase, betraying that he opened it during the journey, and it comes to nothing. It would have been much better if Serena Angelique had been responsible for the swap: it would solidify her as a wildcard, and it would have been an acceptable way for the real Solo to be duped without the viewers losing confidence in him. Then Sandy and Serena could continue to be at odds, but with higher stakes than just Solo's affection.

The secret base where the MacGuffin gets delivered makes no sense. It's a secret defense mechanism against extra-terrestrial invasion, and that's all we know. Normally that would be explanation enough, but something has to assert that the clumsy briefcase swap was a valid beat, so way too much time is spent manufacturing a plot point. An agent we've never met before ends up dying. Apparently the gateway into the 4th dimension can't hurt you as long as you wear your sunglasses, but once you take them off you get drawn into the portal along with anyone who touches you, even if they're still wearing their sunglasses. Does it matter? Not at all. Does it make sense? Not a bit.

It's a messy episode, which is annoying, but it actually manages to be enjoyable nevertheless. I'd watch it again, mostly for Sandy and Serena Angelique, but I hope the next one like this doesn't come up for a wee while.