The world of Golarion is the default setting for Pathfinder, the famous fork of D&D 3.5 edition. While former Dragon Magazine publisher, Paizo, was able to inherit all D&D rules, the OGL didn't enable them to inherit all the lore, as laid out in decades of novels, magazine articles, video games, source books, modules, and so on. But an RPG needs a setting, and so Golarion was chosen as the default world for Pathfinder, and while there arent't decades of novels to build lore, Paizo manages to make up the difference pretty effectively in the Pathfinder Companion series.

The Pathfinder Companion book series are short books of in-depth lore about a single subject. In this case, the subject are the Halflings of Golarion. 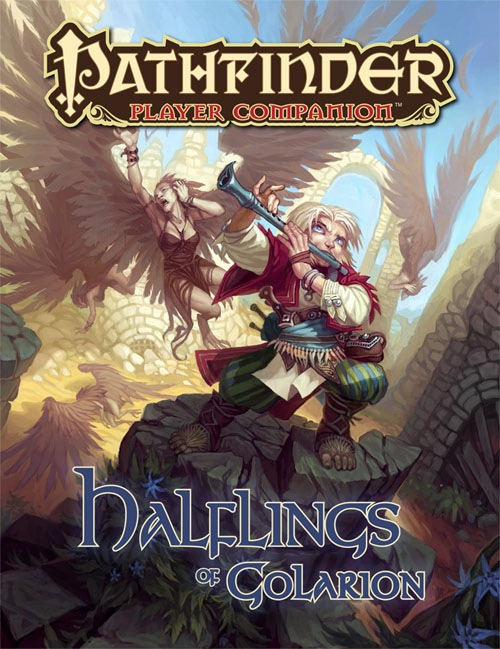 You might not know it from passing encounters with halflings in Absalom or Varisia, but the history of halflings on Golarion has been fraught with hardship. They're a homeless people, with no knowledge of their homeland or origin. In fact throughout both ancient and recent history, halflings were an enslaved people.

At least as far back as Osirion, halflings were used as free labour for that [now excinct] empire. They weren't used necessarily for the great monuments the Osisians left as their legacy, but they were forced to work in the homes and businesses of the wealthy. This continued after Osirion's collapse in both Taldor and Cheliax.

As history is written by the victors, there's not much information about halfling through the ages, but as brief histories go, what we get is a memorable one. I read this booklet around the same time I read the booklet about [dwarves on Golarion](https://mixedsignals.ml/games/blog/blog_pathfinder-companion_dwarves) in 2019 and, no matter what, every time I think about halflings in Pathfinder, their history comes back to me. I couldn't tell you the details of dwarves on Golarion, except for vague dwarvish things, like they dwell underground and they did the Quest for Sky thing, and they hate giants. But the story of halflings, with its combination of brevity and tragedy, makes an impression.

Modern halfling culture is the reason you might not have known halfling history. They adapt well to their surroundings, so halfling communities don't look too different from their surrounding city or region. They do have their own festivals and celebrations and traditions, though. Their love their ale, and their physiology reacts differently to different kinds of alcoholic beverages. Accordingly, there's a sidebar about the mechanical effects of a few special brews. This is the best use of alcohol I've seen in a game so far. In every gaming group I've ever played in, in-game alcohol usually only serves as a vague excuse to do something stupid, but alcohol effects on halflings turn liquor and wine and beer into potions, essentially. Dragon punch whiskey, for example, get -4 to dexterity and a +4 alchemical bonus against fear for 10 minutes. Other varieties of drinks have different but equally interesting effects. I think this is a trick I'll use in future games, should the topic of drinking come up, halfling or otherwise.

Elsewhere in this booklet, there's a wealth of additional lore about halflings and religion. There's a section on sacred keepsakes, too, many of which have mechanical effects for spellcasters.

Halflings don't have a nation of their own, but they're spread all over Golarion. The section on different nations and how halflings fare in each is a great quick reference for players building a halfling character for a specific campaign. Are you about to start a module set in the Mwangi Expanse? Flip to page 12 and find out what halflings do there (they do pretty well there, actually, working as teamsters, sailors, and local guides).

You can learn about specific enclaves of halflings in the section about communities. This isn't organized by location but by name, probably because players are meant to use this information as part of their background regardless of where their halfling PC has had to wander to join the adventure the player is joining.

This section (I say section, but it's just a page) is all about how halflings get along with other races, including specific factions of humans (Chelaxians, Keleshites, Mwangi), dwarves, gnomes ("everybody assumes because we're short, we' best friends"), tieflings, elves, and so on.

This feels almost like a throw-away section to me. It talks about all the various classes available in Pathfinder, and how common it is for a halfling. Of course they all boil down to the possibility of there being a halfling member of that class, so I don't quite understand the value of this to players. It has value as world building flavour, of course, because it informs us of what to expect from each class. You apparently won't find many halfling witches, nor fighters, nor monks, nor paladins, nor druids. I guess it's mostly bards and alchemists. I don't dismiss this section entirely, but I do feel like a pie chart would have conveyed the point a lot quicker than paragraph after paragraph saying that there aren't many halflings in this class, but there are a few.

Weapons and halfling-specific feats. This is not surprisingly one of my favourite sections, for purely pragmatic reasons. This is one of the things I loved about Dragon magazine, and it's what I still love about Paizo: even the source books about lore and culture have stats, and stats are what players (I include Game Masters as players) need for the game.

Speaking of game mechanics, the section on jinxes introduce a brand new racial trait called a halfling jinx, which is sort of the opposite of halfling luck. You sacrifice your good luck to take this trait, but in exchange you gain new abilities that let you inflict bad luck on your opponents. When you place a jinx on someone, your jinx is a supernatural ability, meaning it can't be rejected by spell resistance. It's also not a mind effect, so even creatures without intelligence can be jinxed. A jinx only imposes a -1 penalty to all saving throws (conversely, halfling luck grants you +1 to saving throws), and your target does get a Will saving throw to resist. However, there are feats to boost your jinx effects, so the efficacy of the jinx ability can scale with your character.

I haven't yet playtested these, so I don't really know whether it's worth taking, but it sounds like a lot of fun.

This booklet is a fun and engaging read, and manages to make Golarion halflings unique, and yet somehow familiar, in some unexpected ways. I got it in a Humble Bundle, so it was worth every penny I paid and donated, but I'd buy a physical copy were I to see one in a game store. Give it a read.