I play D&D 5e as well as Pathfinder (1), and my players are mostly oblivious to which one we use for any given game. We build the characters together, or else I provide pregens, and they reference their character sheet when rolling. It works well, but switching between character sheets every few months or, in the case of one-shots, every fortnight, can get confusing.

All in all, my players love the simplicity of the 5e character sheet, so at some point I adapted the [5e character sheet to the Pathfinder 1e](http://mixedsignals.ml/games/blog/blog_pathfinder-5e-character-sheet) system. The idea is that whether we're playing Pathfinder or 5e, our muscle memory is retained. When we refer to our character sheet in the heat of battle, we know exactly where to find the information we need. At the time, it seemed like a crazy idea but actually it works surprisingly well, and I only had to do what I consider adjustment rather than a wholesale redesign. The most common areas of reference were able to stay in place so that players don't have to think about where to send their eyes (no more looking on the right side of the Pathfinder page, but the left of the 5e page, for skills, and so on). There were some minor changes, but I generally managed to restrict major changes to areas that player's don't need to refer to every other turn.

Pathfinder 2e character sheet in the style of 5e

Now that Pathfinder 2 is out, I decided to give this experiment another go. The character sheet for 2e is quite a lot different from the original Pathfinder, much less 5e.

Some things have disappeared: CMB and CMD are no more, there's no Base Attack Bonus, only one value for speed. That's convenient because the 5e character sheet lacked those values, too. Interestingly, at least one thing, Initiative, is missing from Pathfinder 2e but is present on the 5e sheet. This meant I had to juggle some fields around.

There are fewer skills in the list of Pathfinder 2e, and in fact the number is now the same as in 5e: 18 (actually 17 but one is repeated to allow for variety in Lore for 2e and Performance for 5e). The Pathfinder 2e character sheet has a tracking system for weapon and armor proficiency, which fit in, roughly speaking, in the block on the 5e sheet for languages and proficiencies. Swap inspiration for hero points, and the left side of the character sheet is very similar between the two sheets. There's even a slot for Perception between skills and proficiencies.

The top of the middle column, in a gray box, neatly covers ongoing character status: HP, AC, and speed. The bottom, in the 5e original, covers attacks and equipment, and I was able to retain that for Pathfinder 2e by populating it with the strikes block and equipment blocks.

The right column on the 5e sheet covers character flaws and bonds and traits. Because Pathfinder 2e introduces actions and reactions, I used this space for that, plus a block for feats in an attempt to make the character sheet mostly self-sufficient on just one page. 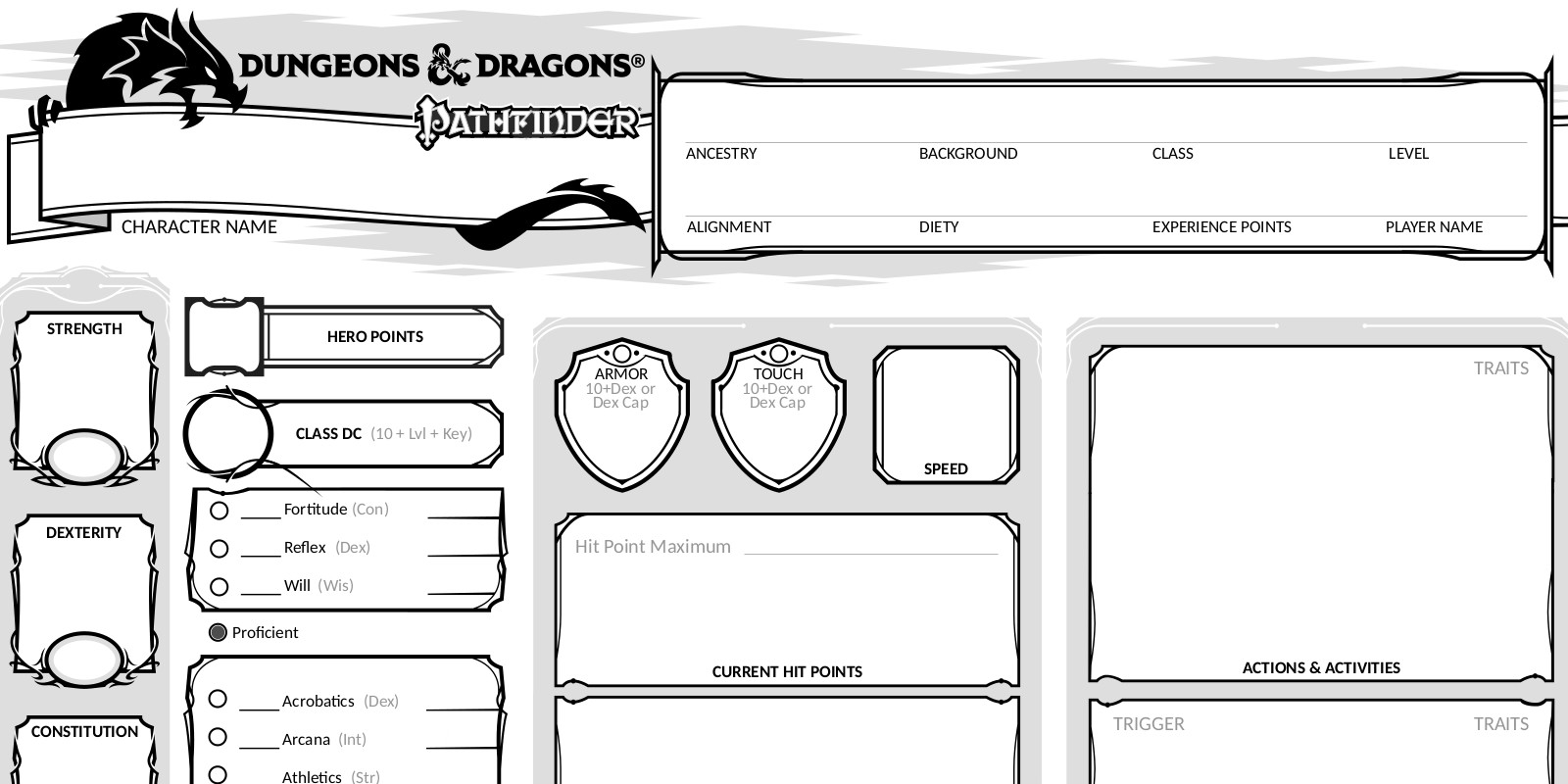 It's a pretty good approximation. The Pathfinder 2e character sheet arguably has way too many fields. It's a tracker, a kind of score card, so it needs fields to track character data, but it does feel clunky to have that group of four boxes for TEML on practically every single element, and a box for proficiency on every element, and a box for item and attribute and so on. I don't think there's one aspect to the character sheet with less than 5 properties to track.

So I simplify that on the 5e-style sheet. TEML is reduced to a blank line upon which the player may write T or E or M or L as needed. Proficiency is reduced to the ubiquitous 5e proficiency circle. Other properties don't get a space at all, with the assumption that a player can add notes in whatever white space they see fit (which, frankly, is exactly what people do with the 5e character sheet any way, in my experience).