In video games, "escort missions" are some of the most reviled quests by players. An escort missions usually involves you delivering a person from one location to another. During the quest, you must keep the person alive from attacks. Seems simple enough, but depending on how the game has been programmed, your ward inevitably either runs way ahead of you or lags behind until you lose track of them altogether, fails to take cover in the face of danger, runs the wrong way, walks into danger even when you enter stealth mode, and so on.

Luckily, watching an escort mission isn't anywhere near as painful as playing one, so this is another good UNCLE episode. There are a few additional twists to liven things up. First of all, there are actually two escort missions. One team is escorting Stryker (played by Ralph Taeger), a high-ranking THRUSH agent, to prison. The other is escorting a look-alike decoy. THRUSH [apparently] doesn't have the resources to pursue both, so they have to choose one. Unsurprisingly, they choose Solo and Kuryakin.

You get the idea pretty early on that Solo and Kuryakin have the decoy, but are being told that they have the real one. I don't know if that was less clear to audiences when this first aired, and it only seems obvious now because I've seen derivative media, or whether it was always obvious. They really try hard to convince you that it's the real one, with Stryker grating on Solo's nerves from the start. At the closing of the scene, Solo has just one question: "Do we have to deliver him in one piece?"

Yep, they've definitely got the decoy.

Then again, what if they have the real one, and we're only supposed to think they have the decoy? After all, they're actually pretty rough with him, they inject him with all kinds of drugs along the way, and when he, predictably, gains the upper hand for a scene or two, he's pretty ruthless. Well, I'm almost sure they have te decoy.

Anyway, there's yet another twist. Stryker isn't the only guest star this week. In a bewildering mix-up that's refreshingly left unexplained for a change, Stryker ends up hand-cuffed to an innocent woman named Fran Parsons (played by Joanna Moore) in a high-end dress shop. 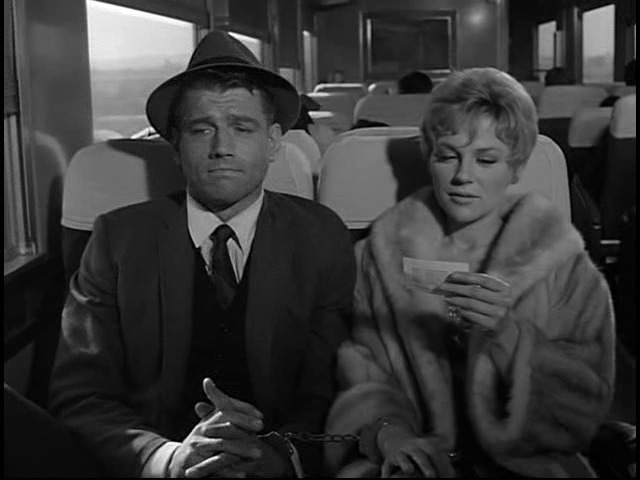 The story is good, and never goes quite the way you expect. Obviously there are lots of complications along the way, some imposed by everyday logistics of traveling, others by Stryker himself (or is it his decoy, playing his part over-zealously?), and still others by the THRUSH pursuers? 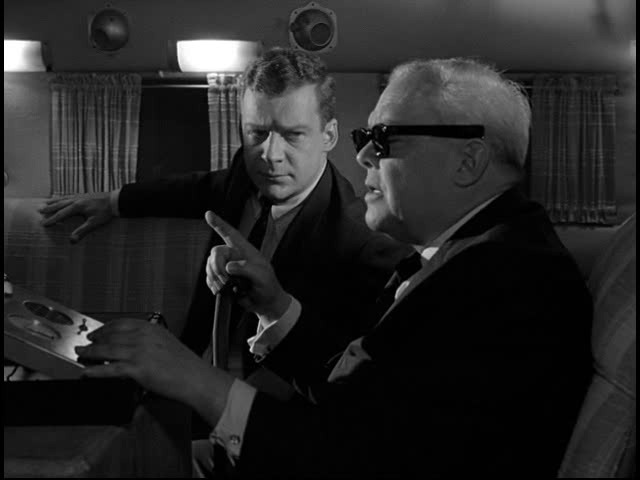 You learn a few things about UNCLE along the way, too. You learn that they badly need better protocols for communicating in code. In fact, they need a code.

You also learn that THRUSH has agents everywhere, and UNCLE is badly understaffed. And you learn that THRUSH is an equal-opportunity employer, as the agent charged with recovering Stryker is in fact blind. It's expertly done, too. His blindness is by no means presented as a hindrance, and he performs his duties with rigour, and as effectively as can be expected from the weekly villain of a TV show. I don't know whether the actor was really blind or not, but it solidifies, for me, a message that the show is clearly trying to convey: diversity is superiour to a monoculture. Over the course of just fifteen episodes, we've seen African UNCLE agents, the Italian branch of UNCLE (including the Italian counterparts of Waverly) and McNabb, a blind Thrush agent, women agents on all sides, a good Russian (progressive for the 60s, as I understand). Sure, the show is about International sabotage in a world ravaged by idiot politics, but there's an underlying and counter-intuitive theme that a better world could be had simply by treating each other as true equals. Or at least, it would be a good start.