When I was a kid, my favourite Indiana Jones movie was Temple of Doom. I actually find it pretty boring and silly now, but it captivated me as a kid. The shadowy thuggee cult and their ruthless goddess Kali were great villains, and as a setting, exotic India was exciting and mysterious. I guess the lore of the thuggee is pretty widespread, but I have to wonder if a young George Lucas might have seen a re-run of episode 17 of Man from UNCLE because there are a couple of strong similarities between

The episode begins with a redshirt UNCLE agent name MacAlister (played by Willard Sage) assigned to bring an important briefcase from India back to UNCLE headquarters. Everything goes well until he's seated 30,000 feet in the sky on the plane. As he chats with a charming young women seated next to him, he's abruptly strangled with a yellow scarf from behind. The woman (played by Neile Adams) doesn't bat an eye.

Next thing we know, Napoleon Solo is arriving in India, posing as a life insurance agent, to confirm the agent's death in a tragic plane crash. He's also to recover the briefcase if it's still in one piece. He meets with the local authorities, who show him the remains of the dead agent. Solo notices that the agent's trademark ring is missing. Stranger still, it seems that some passengers on the plane are still unaccounted for, and then another life insurance agent shows up to investigate MacAlister's death.

During his investigation, Solo meets Deirdre Purbhani (played by Kamala Devi), a flight attendant who was meant to be on the crashed flight but, fortunately for her, was warned by her father not to board. Her father is a former Maharajah, a strict traditionalist, and sometimes gets "premonitions."

After meeting Deirdre, though, some strange things start to happen. There's the matter of a few attempts to assassinate Solo, and then a woman wearing MacAlister's ring turns up at a party although she denies it when Deirdre mentions having seen her board the flight.

The cast of suspicious characters is sizable. Unfortunately, the show writers choose yet again to tip their hand at every opportunity. You learn early on that the other insurance agent actually works for Trush, which we suspected from the beginning any way but think of how much fun could have been had if we weren't sure. Deirdre is benign, but her father turns out to be a secret Thuggee cult leader. 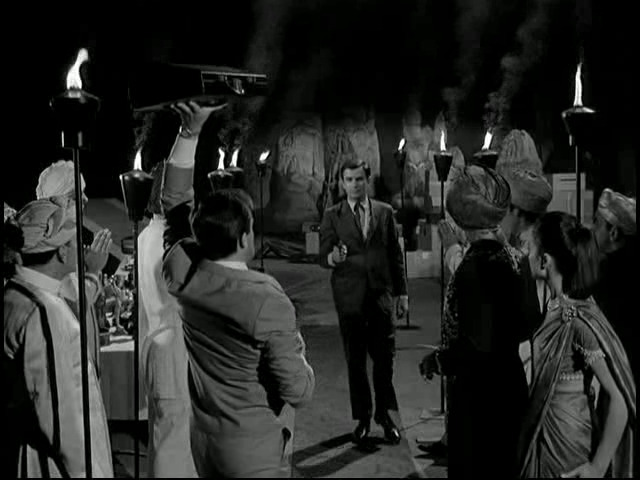 Happily, a few surprises get through, which I'll decline to spoil here, and the story in general never quite went along the path I found myself expecting. Oddly, there was a really nice seed planted in the very first scene of the show about how the briefcase lock is a deadly trap without the right key. I thought for sure it was going to pay off in the final scene, and Solo even goads the villains into trying to open it. Bizarrely, the trap isn't triggered, and something interrupts the process anyway, so that was a waste.

However, everything works out. The heroes and villains congregate in the secret temple of doom, and everything gets resolved. The thuggee threat is neutralized, no still-beating hearts are ripped from chests (that was actually never explicitly threatened, but you have to believe in the accuracy of Indiana Jones), and briefcases are retrieved.