UNCLE is under attack!

I don't mean to bring this every time somebody takes a jab at UNCLE headquarters, but we our introduction to UNCLE in episode 1x1 was a Thrush agent waltzing through the top secret entrance to attempt to kill Waverly. And there were some Thrush hitman in UNCLE's parking garage in the Deadly Double Affair, too.

All I'm saying is that UNCLE headquarters hasn't exactly been presented to us as a stronghold against evil. Then again, maybe that's inspired this episode, in which somebody starts launching concerted attacks on UNCLE HQ from all angles.

It starts innocently enough. A man in the park launches his radio controlled airplane. It soars through the skies and then we see its target: UNCLE. The model plane barrels toward the building as UNCLE agents inside scramble to determine what they're up against. Could it be a tiny nuclear warhead?

Luckily UNCLE has a Laser defense system, so they target the plane to take it down. And they'd have gotten it, too, if only the tar getting hadn't short circuited at the last moment.

After the plane crashes harmlessly onto the rooftop of UNCLE headquarters, Solo and Kuryakin investigate and find a note embedded in the plane's wreckage: "Boom! you're dead."

More attacks follow, each of them as harmless as the previous. The most bizarre intrusion is when an office worker, dressed only in her slip, stumbles in through the tailor's dressing room. It's annoying, and also inconvenient because UNCLE is hosting a group of world dignitaries soon. If they can't keep a random office worker from stumbling into their headquarters, how can they ensure the safety of their guest world leaders?

The office worker (played by Zohra Lampert) doesn't actually figure into the story all that much, but she's the most awkward, geekiest guest star yet. I've seen Zohra Lampert in Splendour in the Grass, but I had no idea it was the same actress until well after the episode was finished. She's a completely different person in this episode. She's awkward, nervous, has terrible posture, about to marry someone she's not sure she loves. In the end, of course, she accidentally catches the villain, and realises that the secret agent life is absolutely not for her and that she does love her fiancé.

I sense that this one was possibly a budget episode. It takes place almost entirely indoors, and mostly within the hallways and conference rooms of UNCLE. You see that in Doctor Who and Star Trek, but what's surprising is that this is a really good episode. Admittedly, I may be a little biased because a major component of the episode turns out to be a whole lot of hacking. 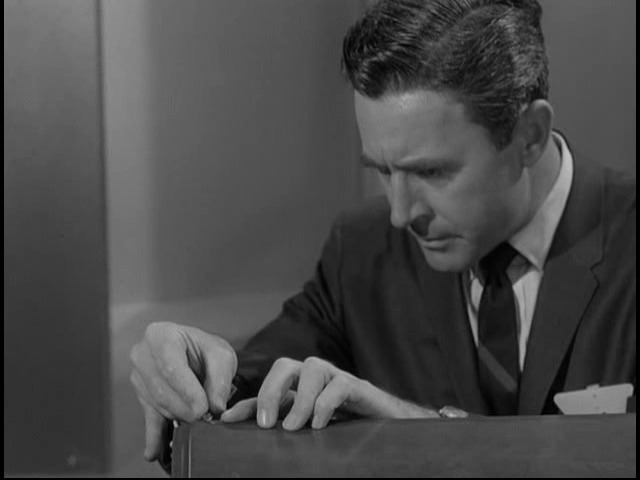 This was cleverly done, and for a change the writers reveal all the right information at exactly the right times. It's got a minimal but really fun cast playing quirky characters, and is absolutely satisfying.