It surprises me to say this on the second episode of the series, but it's possible that Man from UNCLE hit its peak with the Iowa-Scuba Affair. That's not to say I expect the rest of the series to be bad, but this episode is legitimately a thrilling spy story. This is quality I'd expect from Hitchcock. I was on the edge of my seat through the entire episode, and frankly I had to pause it a few times to catch my breath.

It's a perfect episode, so I may as well step through it act by act.

Well, when I say it's a perfect episode, I don't mean the teaser. This one, I guess, was aware that it was an introductory episode (although bizarrely not the introductory episode) and so it opens by breaking the fourth wall, carefully explaining that our heroes are secret agents. Solo and Kuryakin and Waverly each address the camera to introduce themselves, and then the titles roll.

The episode starts in media res, although we don't know that, so the audience believes we've witnessed Solo murdering a man in cold blood. I was convinced throughout most of the first act that this was one of those cheap evil-twin episodes, with a THRUSH agent posing as Solo.

Even when the scene cuts to Solo back at HQ explaining to Waverly what we ourselves just witnessed, he uses the actual name of the character (not his false identity), so it seems like he's talking about a different case, or that he doesn't know what we think we know.

To make matters worse [better], each time the scene cuts it seems that Solo's in a different suit and in a different state, so it feels like we're seeing two different people, and not one man travelling very quickly from one city to another (as secret agents do).

It's confusing and disorienting, and I can't help but attribute much of this to unusually skillful (for a TV show) editing. The audience is lied to, malinformed, misdirected, and disoriented.

Speaking of disoriented, the guest star is Katherine Crawford, playing Jill, a classically wide-eyed young adult yearning to get out of dull Iowa to see the world. 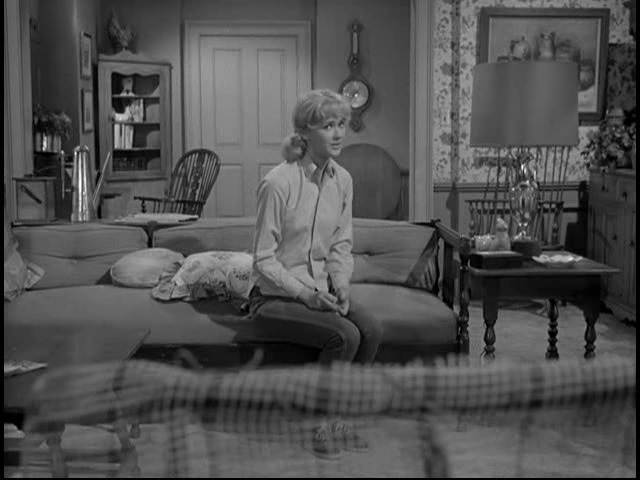 The man she's been dating has just been murdered, another man (Solo under a false identity) has come to town to get to the bottom of it, and yet nothing seems quite right to her. She may be naïve but she's perceptive. She knows something's not adding up, and she can sense a strange similarity in the underlying danger inherent in both her dead beau and Solo.

Solo is surprisingly abrupt and authoritative with her, and just as in the first episode, you get an unsettling feeling that you're not being given all the information you need to make sense of this episode yet. Why did the dead man have SCUBA gear on his motorcycle? Why are there SCUBA divers with sniper rifles in the middle of a field just on the edge of Jill's property?

Of course Jill gets caught up in the investigation, and by the end of Act 2 she and Solo are running through the woods at night being shot at by men with infrared sniper rifles. It's brutal, and this episode makes no apology. You don't get quick quips to lighten the mood, and Solo isn't exactly comforting. This episode gives no quarter.

This is the North by Northwest section of the episode. We delve into the den of the conspirators, we learn uncomfortable truths about what we thought was a small innocent town that got upended by the installation of a nearby Air Force base. It's gritty detective work combined with a fair share of deception on either side.

The audience is once again tagging along with Jill. We're feel exactly as she does: awkward and lost in a world that's suddenly unfamiliar, and hoping against hope that the man we're following deeper and deeper into a plot that apparently makes no sense actually knows what he's doing. We get some answers during this act, but the biggest surprise is the gut punch we get as the freeze frame ending before the commercial break. I won't reveal what that is, but it was genuinely one of the most confusing and most horrific moments of puzzled realisation I've gotten from a TV show.

Jill progresses a lot during this act, too. She's learning to trust Solo, and so (again) are we. But most importantly, she shows bravery that you and I probably couldn't swear we could emulate. After she's driven a car without her protector, Solo, to exactly the spot he tells her, she declines to walk home as instructed. She walks back to Solo, because she wants to see this story to its end. Does she do it for him? Does she do it for herself? Probably both, and it's a powerful moment for her character, and for the audience.

The plot is revealed, the conspiracy foiled. One disappointment in this act is that Jill didn't get the opportunity to take down an evil agent. Solo gets her to safety and tells her to stay put, and I fully expected it to be a story beat that while Solo is struggling against one of several attackers, she'd pop out from behind a corner with a shovel and smack somebody over the head. It didn't happen, though, and maybe wishing for it is just a little too progressive for a 1960s show.

In the end, though, and against all odds, everything at last actually does make sense. The plot is tidy and basically perfect. It's one of the best little spy stories I've seen, because the plot is actually very simple, but it's made complex through the natural unveiling of a mystery.

Along with the mystery, there's a charming romance as Jill thinks she's falling for Solo. It's puppy love, but it was encouraged, as part of the deception, by Solo himself in an attempt to gain her as an ally. We and Solo all know it's more about the glimpse of the real world she's gained, but we share in the same youthful excitement. We want her to somehow find love, but more importantly by the end of this episode, we love spy work.