The first episode of the Man from UNCLE is a solid story with one major missed opportunity. This episode could have been the ideal series opener, but as it is, it's a good episode but a puzzling début.

To be fair, old TV didn't see itself as a story being told in serial. Once they started producing shows, they got played in essentially random order. This is why the original Star Trek, for example, featured Charlie X and Where no man has gone before back to back, with nearly identical storylines and with the latter clearly having been shot earlier than any other episode.

From what I understand, The Vulcan Affair was edited down from the pilot episode, so potentially it was a better spy story before it aired. I'd be interested in seeing the unedited version, but this post is about the episode as it was aired.

This episode is about an ordinary housewife named Elaine, played excellently by guest star Patricia Crowley, who gets mixed up in a special mission to thwart a political assassination. She joins agent Napoleon Solo on his mission, quickly finding herself in over her head as she assumes a secret identity to help UNCLE hunt down an evil THRUSH agent. 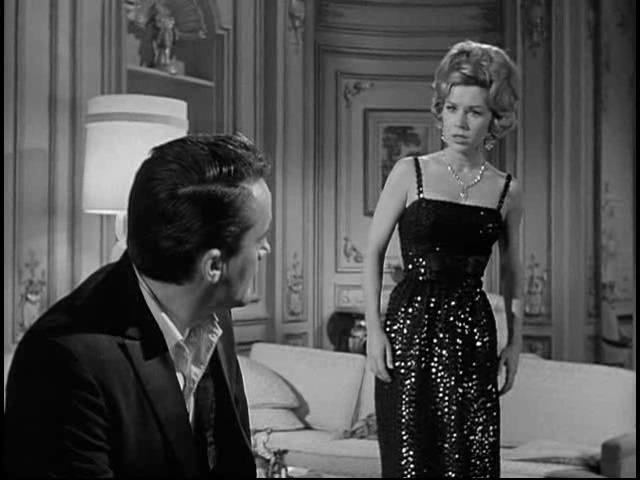 The THRUSH agent being hunted is Andrew Vulcan, who Elaine used to date in college. He's now a wealthy industrialist and a hobbyist assassin. Unexpectedly, she finds old and — as she's happily married in real life — unwanted emotions stirred up as she pretends to be rekindling an old romance. Worse still, she finds herself doubting that charming Andy could actually be an evil mastermind at all.

Solo persists, though, and eventually it becomes clear that he's right about Andrew Vulcan, and together they're able to stop the assassination.

I love the tone this episode sets. The fish-out-of-water story of Elaine is a perfect entry point for the viewer into this strange new world of espionage. What would you do if a secret agent showed up at your house on a Monday morning and told you that you had to rush off with him to save the world?

The problem is, the viewer knows too much for that tone to become fully realised. The episode opens with THRUSH invading the UNCLE headquarters, meaning that our introduction to UNCLE is their super secret hideout getting invaded by their biggest enemy. An odd choice, but worse still it tips Solo's hand: he definitely is a secret agent, and he definitely is fighting for the free world.

Elaine, the viewer's proxy in this world, decidedly does not know this. In fact, there's an amazing scene half way through where she tells Solo that she doesn't believe he's correct about Andrew Vulcan. She refuses to believe that her old college boyfriend is an evil political assassin. Imagine such a scene without knowing, as the viewer, that Solo is legitimately the good guy. It would be a divisive moment. You wouldn't really know whether to trust Solo, or Vulcan, or whether Elaine's been caught in a meaningless political turf war.

The episode would have been far more powerful had we opened on the busy Monday morning of Elaine, loving housewife to her husband, champion mother to her two kids. She's just one of millions of ordinary middle-class citizens. She's happy, but her life is routine and yet somehow chaotic.

We do get a small glimpse of this in an early scene, when Solo first visits her and she's interrupted by screaming children running out to get themselves to school on time. But it's a quick thing, and it comes well after Solo has been established with the viewer as a secret agent for good.

The episode continues exactly as written, but after this new introduction everything that happens becomes a tense story of a woman potentially mixed up with the wrong side of the law. Solo came with a high recommendation, though, and so she believes she's been doing everything she can to save the Prime Minister of a newly formed African nation from assassination.

But in Act 2 of the episode, Solo gives her a tincture to put into the Prime Minister's drink. "What'll it do?" she asks.

"Save him from being murdered," Solo responds.

It turns out that the tincture makes the Prime Minister violently ill. In the episode as it aired, it's obvious that this has indeed saved him from assassination because it forced him to leave the party early where he presumably would have been killed had he remained.

But if we the viewers didn't have faith in Solo, it would look to both Elaine and the audience as if Solo had just tricked her into performing the assassination for him. He told her to poison the Prime Minister, and she did it. It's such an obviously powerful plot point, I have to believe it was planned that way, and only got ruined by editing to make it into just another episode.

One good plot twist does remain in the story as it aired, and I won't spoil here. And of course in the end the good spies are victorious, various lives are saved, and all ends well.

The end of the episode, as it aired, is really lovely. Solo and Elaine fly back to her home airport, and she disembarks loaded with presents (supplied by UNCLE) for her family, who believe she was away at a teacher's conference. We watch with Solo from the plane window as Elaine is reunited with her family, and for every last moment you're waiting for the inevitable over-the-shoulder glance she might give to Solo. The glance that betrays her desire to not leave behind the life of espionage. 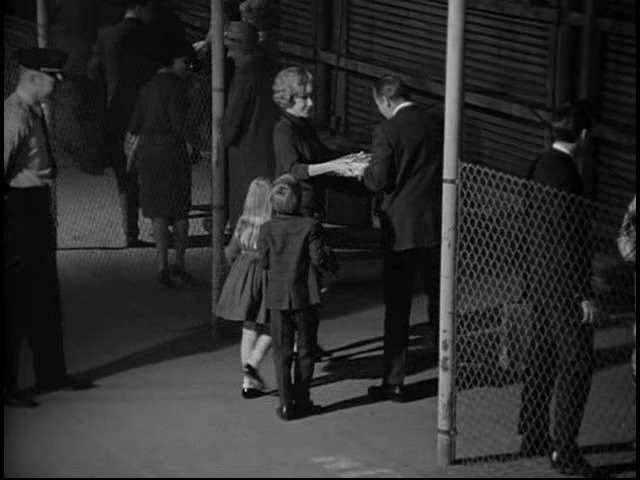 But you know what?

It's a beautiful moment, and I think it wouldn't have been lessened by a stinger that shows Solo returning to UNCLE headquarters to confirm that yes, he really was the good guy.

All in all, this was a good episode. It's stopped short from being a great spy story due to the misstep of letting the viewer in on way too much way too early.

Napoleon Solo's introduction, however, is legitimately a cool moment. Silhouetted in a doorway, agent Napoleon Solo, the man from UNCLE, suddenly appears in the darkened hallways of UNCLE headquarters. The THRUSH invader fires several shots at him, to no avail. Is he firing at a mirror? No, Solo was behind a bulletproof glass partition. He steps from behind the glass, kills the baddie, and the story begins.

Would I have traded that intro for ambiguity? Absolutely.

Next up is The Iowa-Scuba Affair.