For the record, that's how you get UNCLE Headquarters on the phone, should Channel D turn out to be inoperable for any reason.

This episode is a protection episode. UNCLE is tasked with safeguarding a young Indian prince from unknown assailants. Unfortunately, on the way to the safehouse Ilya Kuryakin's VW bus somehow gets remote controlled. This is quite a feat that's never explained, but the ignition, brakes, and steering all get snatched away from local control, and is driven remotely to straight into the clutches of the enemy.

Lucky for UNCLE, Napolean Solo was on a date during the assignment phase, and by the time he gets around to showing up for work Ilya and the prince and his nursemaid have all been abducted without him. This turns turns out to be pretty convenient, because it means they have one man on the inside and one on the outside. 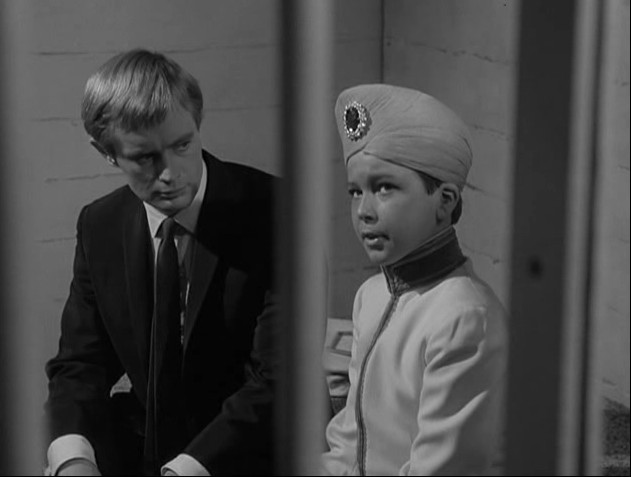 Also to their advantage is that the leader of the opposition is apparently missing in action, so the baddies just throw Ilya and friends into a jail cell while they await orders.

The highlight of the episode is when Solo and the episode's femme fatale match wits. It goes on for 10 minutes across a few cross cuts, but it feels like an eternity because you just know something's up, and you have a relatively good idea of what's going on but you know that Solo doesn't know, and you just have to wonder how he's going to get out of it. It's a brilliant little sequence worthy, in my mind, of Truffaut or Hitchcock. Easily the strongest part of the episode.

I think what the show runners think is the highlight of the episode is the crowned prince and his unusual wisdom. The prince is a well written character, and he's charming enough, but for me the character of an uncommonly wise child is more interesting as a thing of horror than of intrigue. It's the difference between the "abomination" Alia Atreides in Dune and the laughable Anakin Skywalker from the Star Wars prequels. This crowned prince isn't anywhere near Anakin level, but he's a good kid and he says sagely things that, under the circumstances, aren't all that useful or relevant. I think it could have maybe been more interesting if he'd said things that were immediately prophetic, or if he'd devised the winning plan for their escape, or something like that. Instead, he gives good spiritual advice but does little to advance the plot.

For the house sequences, both during the teaser and the matched wit sequence in the middle, I found this episode to be enjoyable. I'd watch it again, mostly for the Solo scenes. Ilya is relegated to being the damsel in distress yet again, and the crowned prince isn't an amazing character, but the plot is solid and all the loose ends are tied up neatly by the conclusion, and I haven't even mentioned who the real bad guy ends up being. This is worth watching.