Getting started with RPGs

Tabletop role-playing games are fun, but getting started with them can seem overwhelming. Luckily, we all started somewhere, so if you have yet to dip your toes into RPG, you're in good company. I got started with D&D when I was in middle school: some friends were sitting around on lunch break rolling die and jotting the results down in a notebook. Turns out they were building characters, and they invited me to join in. After years of being on the periphery of the game, it wasn't until I was an adult that a girlfriend introduced me to how to play it properly that I started playing in earnest.

That's the short version of how I got started, but the story's different for everyone, but when you get into details, literally nobody has followed the same path. This article is written based on my history, hindsight, and my experiences introducing people to the game. Your story is going to be unique, so take my advice as suggestions. Use what works for you, and improvise as necessary.

Choose a game, any game

There are a lot of RPG systems out there: D&D, Pathfinder, Starfinder, Powered by the Apocalypse, Open D6, Fate, and so many more. You can start with any one of them, and you don't have to play just one.

But if you want to play, you have to pick one. Sometimes, the choice is made for you; if you live in a small town where you're lucky to find two people who have heard of D&D, then playing D&D is a good choice. If you live somewhere that has two dozen gaming groups meeting on a regular basis, eager to bring in new players, then you can take your pick.

Alternately, pick the one that appeals to you for any reason. You don't have to know people who already play a game, nor do you have to have done research about a game, to know that you're interested in experiencing it. So choose that one, and then get ready to play.

Bottom line: Pick any game to try. There are no right or wrong answers!

There are caveats to this, but generally it's perfectly acceptable to show up to a game and ask politely to be taught how to play. That might surprise you and the idea of making such a request may even cause you anxiety, but even an "old pro" has to do this. Think about it: someone who's played D&D for 40 years is useless at a Blue Planet game, so it's not uncommon for very experienced players to sit down at a table and ask to be guided through the character build process and to be taught the how to play. When was the last time you ever got angry at someone for joining in on a game of Texas Hold 'Em or Monopoly without first knowing how to play?

The caveat is that you should ask politely and without expectation. If a gaming group that's been meeting for years advertises itself as a high-level (sometimes the terms "mythic" or "legendary" get thrown around) campaign, then it's quite possibly a "serious" group that doesn't have an interest in slowing down to teach someone how to play. There's nothing wrong with that, and there's technically nothing wrong with asking anyway, but you'll probably have greater success with groups that give some indication that they are open to new players or that are just starting a new campaign.

The foolproof method of finding a group of people to play an RPG with is to assemble it yourself. Depending on levels of interest, you might have to make some new friends. You might not be good at making friends, but if you can find other people interested in playing an RPG then you've at least found other people with a common goal, and that's at least enough to get together around a table and learn how to play.

Quick tip: If you're fortunate enough to have a local hobby or game store, ask if any gaming groups meet there regularly, and whether or not any are open to new players. Otherwise, form a group and start playing to learn.

Whether you have found a friendly group of experienced players to teach you a game or whether you've assembled a group of new players to learn together, at some point you should read the rules. The "G" in RPG stands for "game", and as with any other game, it's confusing and frustrating to not understand the rules. How do you learn the rules? You buy and read the rulebook.

Different RPG systems have different traditions for how they release their games. For instance, the world's oldest RPG, Dungeons & Dragons, releases all kinds of books detailing its fantasy world of heroes and villains, but all you need to play is the Player's Handbook (PHB for short). When you go to a store to buy D&D, you are actually looking to purchase the Player's Handbook, not any of the hundreds of other books available about the D&D world or adventures.

To confuse matters further, any game that's been around long enough is bound to have had updated editions released, so you want to do just enough research about your game to know the latest edition. While older editions are great for nostalgia or throwback retro games, they're aren't necessarily all that useful if you're playing with groups of people who are staying current with the game.

Some games are far simpler. Maybe they haven't been around for very long, or maybe they've been developed by a small team with limited resources, or maybe they're just designed to be minimal. Whatever the reason, some games are only a core rulebook, with all the rules and information you need in one book release.

Some games don't even cost money, so you can download the rules, legally, for free and start playing. Just look around on sites like DriveThruRPG, Risusiverse, Open D6 wiki, and Brent Newhall's Musaeum of Fantastic Wonders.

Bottom line: If you're coordinating purchases with friends who intend to play together, you should all get the same edition (usually, the most recent) of the games core rulebook. If you're joining an existing group, find out which book you need before purchasing.

Reading a book of rules is a thrilling prospect to some, and next to impossible for others. Fortunately, you don't actually have to sit down and read a rulebook from cover to cover. You can use your rulebook as a reference manual, looking up bits of information as they come up in game play, or you can divide the labour among friends such that one person learn character building, another learns combat rules, another learns the magic system, and so on.

The same caveats apply: if you join a group that prides itself on playing a strict game adhering to the letter of the law, then there's an expectation that you understand the rules. It may be insensitive of you to join such a group and make no attempt to learn. Other groups either don't care so much about the rules, or they're just happy to eternally remind you of them.

I feel that a game is more fun when I understand the rules, and I enjoy learning rules to games, so I voraciously read rulebooks even to games that I'm not actively playing. But I also play games with people who don't own the rulebooks themselves and wouldn't read them anyway. Gaming attracts a diverse crowd, and the system is flexible enough for everyone, so don't be afraid to be yourself.

Bottom line: If you want to know how to play a game well, then read the rulebook. If you prefer to learn as you go, use the rulebook as a reference as needed. 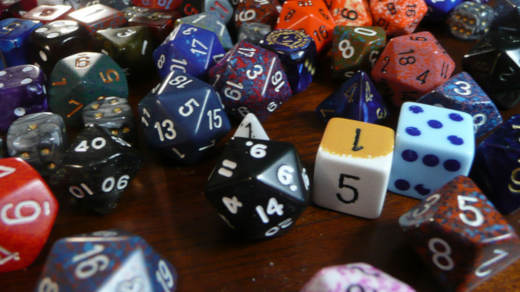 Get some cool dice

The rulebook that you have purchased tells you what you need in order to play the game. Most all RPGs require dice, but what kind of die differs from game to game. If your only experience with tabletop gaming so far has been Monopoly and Yahtzee, then it may surprise you to learn that there are several kinds of dice, and not all of them even have numbers on them! There are 20-sided die (d20), 12-sided die (d12), and so on down to d3, percentile die (d100), Fate die (a d6 with no numbers, just plus and minus symbols), coin toss (d2), combat charts, ladders, card decks, and anything else a game designer can come up with.

After you've either played a few sessions with experienced players who can lend you die, or else you've read the rulebook and learned what you need, you should go out to your game store or onto the Internet and purchase the dice and other supplies you need to play. Again, there may be flexibility depending on who you're playing with (I have a friend who brings nothing but food to the game, and the rest of us happily supply her with die, pen, and paper), but having your own supplies means you can game anywhere, whenever the occasion arises.

Bottom line: Get the dice you need to play the game.

Once you've started playing the game, you should invite more people to play with you. Don't turn into that gamer you yourself were intimidated by when you started out! There are lots of people out there who are curious about RPG, so invited people to your game every now and again, offer to teach them how to play.

Bottom line: Share what you've discovered with others, lest you become the very thing that almost prevented you from gaming.

Some games, like D&D, Pathfinder, and Shadowrun excel providing background and lore about the game setting. There's so much out there on each of these games that you'd have to get a part-time job just to pay for all the books you could buy. If those are your games and where your interests lie, then you have no shortage of material to enjoy, but that's not the only way to immerse yourself in a game world.

Role-playing games are, first and foremost, all about the power of imagination. You can make anything be about your RPG of choice, whether it's a mundane task you're doing at work or it's the guilty pleasure of some silly TV show, or an old SF or fantasy classic. Everything can contain inspiration, if you let it, so start looking for ideas and game hooks in everything. You'll not only find inspiration, but you'll probably find that you're secretly gaming a lot more often than just those evenings you're at the game table.

Furthermore, there are lots of games out there. Try new ones! Go to a game convention, or find a group playing something you've not tried yet and ask to drop in as a guest. Even if you don't like a game, there's probably something in its rules or game world that will spark ideas or provide a new perspective.

Bottom line: Don't let the game start and end at the table, and don't be afraid to try now ones.

Just a bunch of dice by Brent Newhall. Creative Commons BY.