It's Pi day today in the USA and any nation that expresses dates in the backwards format of day/month. In honour of over-thinking numbers, I present to you my efforts to map human ages to RPG levels.

I'd always meant to generate myself as a character in a game, but since I often play fantasy games it was difficult to equate my real-world skills with fantastical counterparts. I've been playing Starfinder lately, though, and while assigning myself heroic science fiction feats may be presumptuous, it's a lot easier to imagine I have skills in, say, computers, than in arcana.

One thing that's difficult to equate between real life and RPG life, regardless of setting or genre, is the concept of levels. What's level 1 compared to level 18, in real life? How do you know when you're one level or another?

In tabletop life, you gain new feats and skills because you have leveled up. But in real life you know you've leveled up because you have gained new skills. In real life, there may be moments when you accomplish a task that you've been trying to master for months, and in each such moment, you sit back and breathe a sigh of relief and satisfaction, and mutter to yourself "I think I've just leveled up". And you probably have, and you should be proud of those moments, because you've worked hard for it.

That's a pretty good measure of the actual function of leveling in real life, but if you're generating a character sheet, you hardly want to go back and review every major accomplishment you ever made, especially since objectivity is difficult to apply in retrospect. The feat that got me to 3rd level seemed monumental at the time, but today that same feat is second nature, so it's difficult to see it as a major event.

If we look over a typical human lifespan, we can make some general assumptions about leveling. For instance, for the first 15 or 20 years of life, there's probably very little leveling happening, because tabletop RPGs don't tend to start at character birth. Leveling in earnest, therefore, probably starts as a teenager or young adult. There's likely a sharp rise in leveling during university years (whether you're in university or not) because during this time, one is typically preparing for a livelihood by learning new skills. The rate of increase gradually becomes more linear, as one tackles one or two major new challenges each year, gaining legitimately specialised experience by overcoming unique obstacles in life. And finally (and ideally), one becomes near-mythic by retaining an accumulation of life experience, whilst learning new skills and wisdom by listening to the perspectives of younger peers.

It's a little different for D&D characters. Most D&D characters level sharply with a brief time, because they have the dubious luxury of physical and spiritual battles with tyrants, monsters, demons, and elder gods. And they do this within a year or two or three, depending on the campaign you are playing. D&D leveling stops at 20, at which point they may literally attain godhood, or epic levels (Pathfinder Core Rulebook, p406).

Here are these assumptions on a graph: 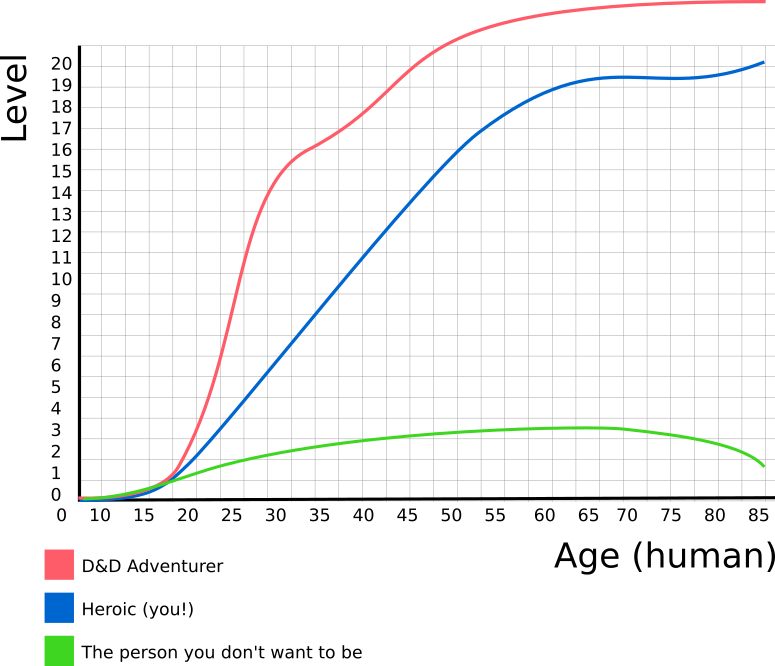 Of course, the age axis is variable, since one person may start leveling earlier or later in life than someone else, but assume this graph is an average scenario. The sad, lonely green line represents the person that we, presumably, never want to be: someone happy to learn little throughout life, and then regress into the habits and assumptions of youth even in old age.

Believe it or not, this idle musing does have application to our tabletop games. As you design a player character for yourself, or an NPC for your players, you have to think about age. Since you have to come up with an age, let a character's age to level ratio serve as a guide for their back story. If a particularly young character is already at or beyond level 1, what does that say about her? Did she have a harsh upbringing, demanding that she learn skills early? Or was she an apprentice of a skilled master since birth? Or maybe she's among the chosen few whom the gods have blessed with great skill from early on. Similarly, if a character is already middle-aged but is just reaching a relatively low level, how does his back story explain that?

Age can be exclusively for flavour, but if you use age and relative level as a story device, it can result in a rich back story. And a rich back story can often lead to greater satisfaction when goals in a campaign are reached, because often these goals inherit added significance from a character's personal history.