In my previous blog post, I explained the D&D 5e implementation of noncombat-based XP, because sometimes your gaming group isn't playing for constant non-stop combat. Now, that doesn't mean your gaming group shouldn't play only to fight; treating D&D as a series of skirmishes with some looting in between is a perfectly valid and fun way to play the game, and one of my preferred methods as a player. But as a GM, some of my groups prefer talking and exploring to killing. In this blog post, I'm going to explain the system for noncombat XP developed by Paizo in their volume Ultimate Intrigue. 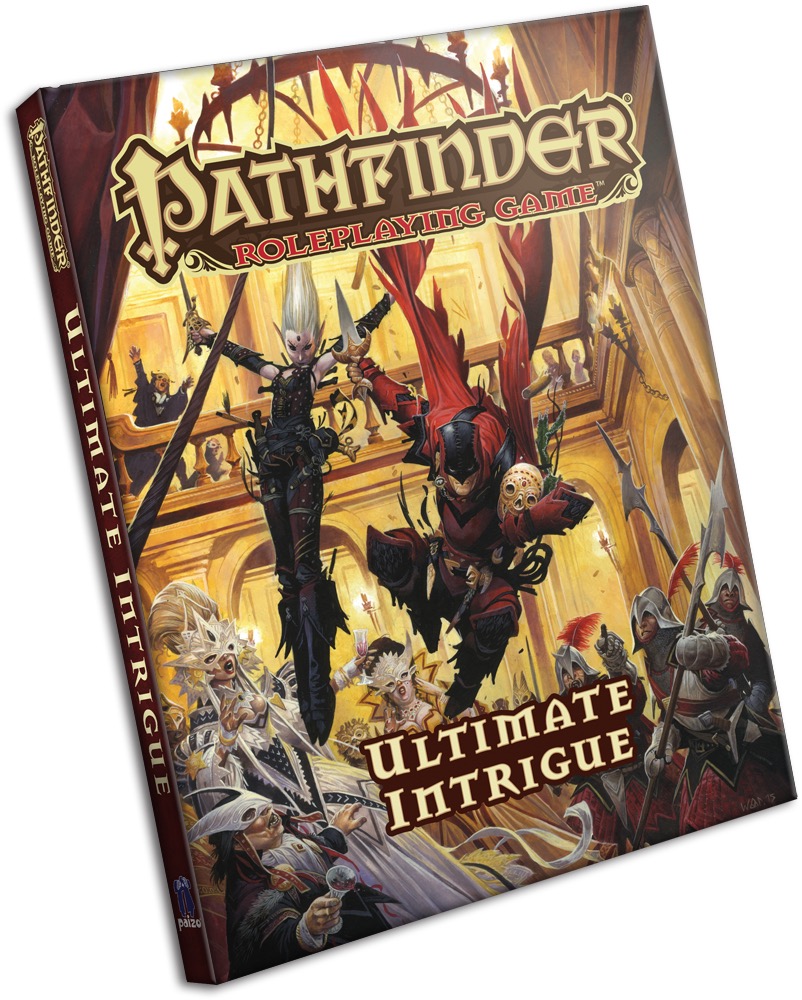 Unlike WotC's 2 page Unearthed Arcana, Ultimate Intrigue is over 200 pages of official, optional rules for Pathfinder. That means it's been play-tested and is perfectly integrated with existing rules, so it's easily incorporated into a Pathfinder game. However, Ultimate Intrigue focuses on social interactions and wholly excludes exploration as an option, so there is no direct equivalent to 3 pillars, although there are ways to get close with other Paizo products, which I'll explore in this article.

The first thing Paizo does is to create a new class that specializes in social intrigue: the Vigilante, a cross between Batman and Sherlock Holmes, in which the player can play a socialite by day and a masked Pathfinder hero by night. This is surprisingly effective, giving the player access to a sort of social wizardry with talents like Many guises, Feign innocence, Instant recognition, and more. The result is that a player feels comfortable in social situations because their character demands immediate confidence and trust from NPCs, but is actually, more or less, a rogue otherwise. The benefit here is that the player can have an advantage in social interaction without the players and GM role playing or hand-waving days or months of the character getting established in the social structure of the setting. It's assumed that the PC has a trusted place within the social order to the point that no one would ever suspect a double life.

Additionally, there are 50 pages of archetypes for existing classes, such that any PC can have a social leaning. It's a brilliant way to empower players with no social skills the ability to play through a story requiring heavy social interaction.

Aside from social-based classes and feats, Ultimate Intrigue also invents a mechanical system for verbal debate. Such an encounter starts by rolling not initiative, but social initiative (using Charisma as the base initiative bonus). At the start of the debate, each character involved gets a number of determination points (the average of their INT+WIS+CHA, plus total hit dice). Determination points serve as the hit points of the conversation.

At the start of the debate, the character with the higher initiative role chooses an opening tactic. There are several tactics defined: allegory, baiting, emotional appeal, flattery, logic, mockery, presence, red herring, rhetoric, and wit. Each has associated skills, so a player can make strategic choices about how the argument goes, although some tactics cannot be used as an opening move, or twice in a row, or to counter other tactics. The exchange DC is set to the result of the opening character's roll, and the ante is increased from its starting value of 0 to 1.

Combat continues in this way until a character either concedes or is reduced to 0 determination.

Not every conversation in a game should be structured as social combat, just as not every confrontation in a game is physical combat. However, by creating game mechanics around a debate, Paizo provides a group a fun and valuable alternative path around problems that otherwise might necessarily be answered only by combat. With social dueling as a quantifiable option, players can choose to "attack" what blocks their way to success by a fierce debate rather than a physical fight, and it's a fun and powerful encounter requiring no more skill in verbal debate than a combat encounter requires physical prowess.

I'm not great with people. I can state facts and demonstrate logical conclusions, but I don't do well with emotional appeals or playing to an audience. No amount of role playing is likely to make me more sociable. For that reason, I find Ultimate Intrigue a perfect solution to the awkwardness of "my character talks to the mayor, and acts all friendly and stuff, but he says it better than I'm saying it" role play. And on top of that, it's a lot of fun. The verbal combat mechanic removes the burden of bothersome details from the encounter, allowing the group to create fun highlights of a debate, and lets a player use game logic by choosing tactics and skills, plus that ever-persistent thrill of a dice roll, to deal with an encounter.

It's probably not for everyone. Some players want to enter social combat because that's exactly what they're good at, and it's what's fun for them. In my experience, even a GM not skilled in social interaction can play off of a player who's good at it (in fact, part of being "good" at conversation is the ability to make up for the other side's floundering), so these mechanics are more useful as a fallback for players than the GM or the game itself.

There's no allowance for awarding players for exploration in this system. Then again, unlike the Unearthed Arcana for 5e that require a wholesale restructuring of how XP works, Paizo's rules for social combat integrate perfectly into the existing Pathfinder and Starfinder games. There are arguably already rewards for exploring in Pathfinder and Starfinder: the more you explore, the more adventure you find, whether you lust after combat or treasure or just another good yarn.

However, if you feel that your players require incentive for exploring rather than chasing plot points, there is precedence in the Pathfinder Kingmaker adventure path. In Kingmaker, a 4-person party is awarded 400 XP for exploring one hex of the regional map (usually, D&D maps are divided into 5-foot squares, but for maps covering a large region, hexagons representing roughly 95 square miles, or 12 miles from an angle to its opposing angle).

This system gives players incentive to branch out and explore rather than just moving from point to point, which in turn provides the GM the opportunity to plant new story seeds. In practise, I find that this demands I have a regional map. I generate such a thing quickly with the open source text-mapper web app. Once I have a regional map, each hex has a number, so I create a numbered list of all the files in my RPG modules directory of my computer, and as quickly as that, I have back-stories and plot seeds for each hex. The module assigned to each hex dictates what's going on in the area, even if I don't reveal the main plot hook to the players unless they persist in following the thread. My players are pretty focused, though, and if they encounter a villager on the road complaining of a ghoul infestation in a cave along the road, they don't hurry off to start a new module, and instead assure the villager that the ghouls will still be there after they finish their current quest. But having each hex contain at least one module means it's easy to give the hex a theme. For instance, if the players are in hex that's been assigned the 12 Tombs of the Lizard King module, then when players enter it and start exploring, I know that there are no merchants in the region, stores are unusually barren of supplies, peasants are leaving their land, and NPCs are muttering about robbers and brigands. Should they return to the hex for more, later on, then they'll meet the local count, John Brunis, who will hire them so that the full Lizard King adventure can begin in earnest.

The Paizo answer to noncombat XP is integrated into the existing Pathfinder system. If you know that system already, adding this as an option is relatively easy; you buy the book, read over chapter 4 for social combat, and maybe you offer your players some social options from the first 3 chapters. If you are still getting used to D&D 3.5 and Pathfinder rules, then it will take longer to incorporate these rules simply because you're still developing an understanding for the framework into which they fit.

Ultimately, whether you opt for these rules or for the 5e Unearthed Arcana will probably depend on your group and what they need. Both are strong systems, and in the next blog post I'll cover my homebrew system.