I don't always use battle maps in my D&D games, but when I do, I often use whatever I have lying around for miniatures. I've used Lego figures, glass game tokens, cheap wooden beads from a thrift store, and coins. I lead a pretty minimalist lifestyle, and D&D miniatures just haven't been high on the list of stuff to cart around with me, especially given that most people I play with have plenty of miniatures to share. Since moving to New Zealand, though, I've found myself being the Dungeon Master more often than not, and often I'm playing with people new to the game. Having settled into a comfortable home on the South Island as a remote tech worker, I have a little more space for gaming supplies, and so when I saw a 6-pack of pre-painted miniatures at a gaming store, I decided to make the purchase.

Specifically, I purchased the Icons of the Realm Starter Set. The Epic Level version of this set has 7 miniatures, and seems to be the updated version of the Starter Set I purchased. The price of the set was $25 USD, purchased from my game store away from home, Game Theory in Raleigh, North Carolina.

The idea of painting miniatures appeals to me, but so does the idea of dropping everything else I have going on in life and just becoming a full-time gamer. Realistically, neither of those things are going to happen any time soon. I'm not a fine artist, I have poor eyesight, my hand is not terribly steady, and I don't have lazy days with nothing better to do other than paint miniatures. Miniatures that have already been painted are small little luxury items for me.

These miniatures are plastic, not pewter like in the old days. This means that in addition to being pre-painted, they're able to have fanciful effects, like translucent fireballs and flaming axes. 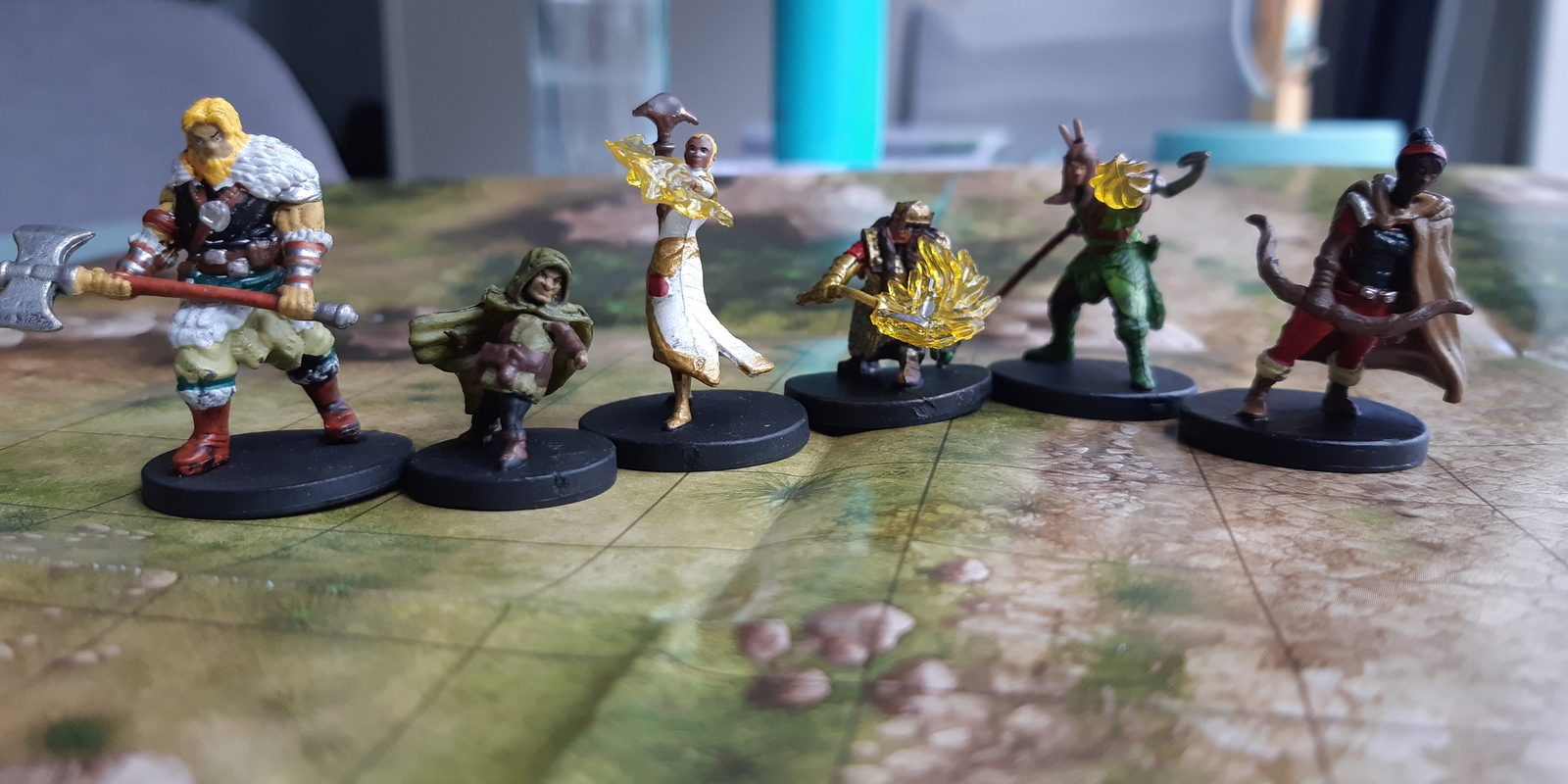 I guess I've always had a hard time with the way miniatures are frozen in one pose, because my main complaint about these miniatures are that some of them are always blasting somebody with a magic missile. It doesn't matter whether the player character is threatening a demonic villain or comforting a frightened child, they're always on the attack. For whatever reason, that's hard for me to ignore, and I much prefer neutral poses. Heck, that's probably why I find it so easy to use glass tokens instead of miniatures.

That minor complain aside, these miniatures look great. They're in great action poses. They look like an iconic character from a fantasy book cover. They're perfect (for most people, or for me as long as I stop noticing that their pose may not match their in-game status), and it's a real pleasure handing one to a new player.

The value of miniatures

Poses aside, miniatures can be problematic. Pre-painted ones doubly so. The likelihood that a mini is going to match what's in a player's mind is very small. Many players have a very specific idea of what their character looks like, so if you hand them a mini that betrays that idea, the inherent imaginative magic of D&D is lost. That's why serious gamers love to paint their own miniatures, and it's why I envy them their time and talent.

However, even pre-painted miniatures can feel magical to a new player who hasn't yet learned how powerful building a character can be. If you're handing a new player a pre-generated character build, or if you're showing them how to build a character but you present the miniatures to them as a way to introduce the concept of classes, this starter set is brilliant. Don't think of these miniatures as the embodiment of a player's character idea, but instead of the iconic classes in the Player's handbook jumping off the page into the real [game] world.

I get the most mileage out of these miniatures when I run one-shots for new and experienced players, or for introductory games for new players. They're the generic, standard, off-the-shelf mini set I need when I want to get a game going.

As many people do, I play D&D with maps and minis as often as I play it without. I don't think one way is better than the other. But if you want to reinforce that D&D is a game and not just a collaborative story, or if you just want to help people visualize where their characters are in relation to their enemies, then picking up a set of miniatures can be useful. The set I bought includes a map: it's just a basic rocky field map, with a grid, and unfortunately it's only one-sided (it easily could have been two maps in one, had they printed, say, a stone texture on the back). Other sets are specific to published adventures, so you can take a gaming group through a WotC book and always have the right monsters and villains on hand.

These miniatures aren't exactly a necessary part of your gaming kit, at least not the way dice and rulebooks are, but they're one tier down from that. They make for a well-rounded kit, perfect for those one shots you DM, and for the D&D League or Pathfinder Chronicles games you play.

And frankly, the Wizkids line of miniatures could easily become the add-on kit to each WotC adventure, if you have the funds and inclination. They release very nice sets of minis for each published adventure, and it seems the obvious marketing model to consider each book, along with a requisite set of miniatures, to be the "complete" game experience. Better yet, it's entirely modular and optional, so the Wizkid sets are a great addition to what is truly the best physical game system ever devised.

Photo by Mixed Signals, licensed under the Creative Commons BY license.