When sanity came briefly to the Gathering

If you've been a longtime Magic the Gathering player, or else just a longtime fan like me, then you may recall the Portal and Portal Second Age sets from the late 90s. If you're too new to the game to recall the Portal sets, then there's roughly an equal chance you may or may not have encountered some of its cards in the wild. Most of the cards in the sets are legal in Vintage and Pauper and Commander, at least, but there aren't really any cards in the set considered run-away hits. In fact, the sets were widely considered failures by the game's players and designers, which is weird, because for me they were, at the time and even today, the best sets available.

About the Portal sets

I still have my original Portal and Portal Second Age boxes, decks, and all documentation included in each set. The Portal series (including a rare Portal Three Kingdoms set sold only to the Asian market, of which I have basically no knowledge) were designed specifically as starter sets.

The original Portal box included two pre-constructed decks of 35 cards each, two playmats, and a player's guide and rulebook. In other words, you could buy the Portal box, take it home, and play it with a friend. And when you were done playing it, you could play it again. And again. Just like every other game on the market. 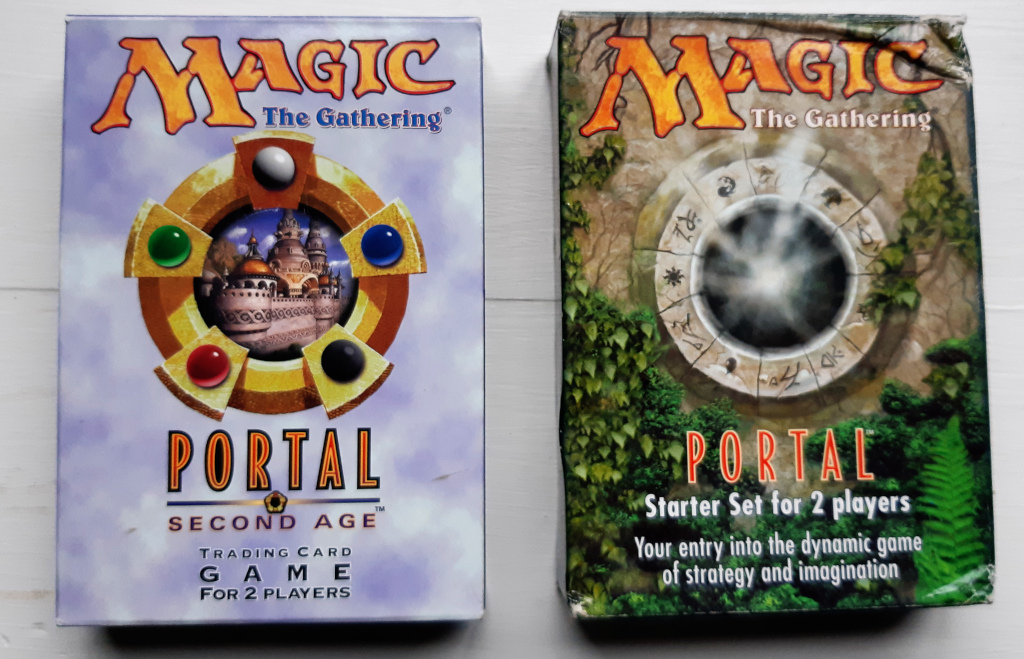 The second iteration of this experiment, Portal Second Age, came in a box with two pre-constructed decks of 30 cards each, a 15 card booster pack, playmats, and rules. It was also sold as a Gift Box containing two decks, two 15-card booster packs, playmats, glass beads, a step-by-step play-along guide, and a complete rulebook.

They supposedly failed because existing players thought of them as Magic for Dummies and new players found them ultimately too different from "real" MTG (some of the terminology was slightly different, and the decks included no instants or artifacts).

To me, that sounds more like a marketing problem than a product problem. I find the design and concept of the Portal sets to be smart, balanced, and clear. And here's exactly what I like about them.

MTG is steeped in specialised terminology. There's a deck, spells, summoning, summoning sickness, sorcery, enchant, graveyard, exile, blocking, counters, power, toughness, life. And those are just the terms you need to learn to understand the basic rules. On top of those, there are "keywords" with special connotations, which I'll address soon.

The cool things about these terms is that they're highly atmospheric. They help players get immersed in the game. You don't discard a card spell, you send it to the graveyard (unless you exile it). You don't counter-attack a creature, you block it (even though the creature takes damage from your blocking action, which certainly sounds more like a counter-attack to me).

These terms aren't just mysterious to new players, they're unclear. And worse yet, they're equally unclear to both new gamers and experienced gamers. You can play dozens of card games and still be confounded by MTG's terminology. Well obviously if you play MTG itself frequently, the terms become clear, and they start to make a lot of sense and they do indeed add a heck of a lot of flavour. Playing MTG is more than just discarding cards, it's summoning creatures, casting spells, exiling your enemies, and much much more. But what's the cost of such immersion?

A fierce learning curve. That's the cost. And it's a cost that Portal refused to pay. Portal used plain terminology in its rules and materials. You had a deck and a discard pile. You could attack on your turn, or you could intercept when being attacked. It was simple and clear and communicated with players in terms that they already knew.

The cards made for these sets also featured some important advances in user experience, most of which were sadly dropped for all following sets.

One simple addition to the cards was a sword icon and a shield icon next to power and toughness ratings. It was such a simple indicator, and so perfect. It was an important reminder for new players, and easily ignored by experienced players. It was dropped in later sets.

Another innovation was the separation of game text from flavour text. No more would an innocent phrase like Hulking goblin can't intercept be mistaken for an opinion instead of an actual game mechanic. This is one change I think they could have taken farther. In an ideal design, I think the keyword would be bold against a normal font, and the mechanics would also separated from flavour text. New players know what the English words Flying, Haste, Vigilance, and Intercept or Block mean, but they may not understand they're mechanically significant to the game. If you don't understand that a word is being used in a way outside of its normal meaning, then you also don't know to look up the new meaning. A new player with a Wind Drake can acknowledge that the creature depicted on the card can fly, and never think to look up what flying means to the gameplay.

One innovation in Second Age has persisted: the syntax of the card type. It wasn't until Second Age that cards were identified as, for instance, Creature - Goblin, which is an important usability feature when a spell explicitly affects "all creatures".

The Portal sets included "playmats". These weren't like the linen playmats of today, just fold-out glossy paper strips. But the quality isn't what matters, in this case, it's the documentation that counts.

The playmats included with Portal were at-a-glance cheatsheets in every respect. There was a labeled spot for your deck. There was a place for your discard pile, featuring a graphic explaining what each element on the card meant. There was a counter for your life points. Explanations in just 4 bullet points of attack and intercept mechanics. And labels to indicate where your creatures went (the battlefield in modern terminology) and where your lands went. It was a beautiful work of highly functional art, a dream come true for new players.

I admit that the standard rulebook was nothing special. Today, there's a fantastic quick start guide available at magic.wizards.com/en/magic-gameplay, and it's easily a better introduction than the Portal rulebooks. However, the Portal Second Age Gift Box included a play-along book (clearly marked Read this first) that allowed players to follow along with a game using the actual cards in the box, which had been placed in a specific order to match up with the example game. It was like one of those annoying, yet infinitely useful, video game tutorials that prefaces every computer RPG or shooter you've ever played. It wasn't perfect, but it was innovative, and it demonstrated a desire and willingness to teach new players what the game was all about.

I think one of the most significant innovations of the Portal sets was the illusion that you were buying exactly one game. Whether you actually believed that or not is beside the point, because it's difficult and scary to buy into a game that has no foreseeable end. Even in the late 90s, everybody knew Magic the Gathering was a trading card game. If you weren't into baseball cards or Garbage Pale Kids or whatever cards were on the market, then MTG was its own best argument against itself. To the uninitiated, it seemed that MTG wanted you to buy cards, and then to buy more, and then buy more, until you somehow assembled a playable deck. And once you got a playable deck, you just knew you were going to have to go buy more cards once all your friends showed up to school with new and more powerful cards than what you had.

The Portal sets made you believe, at least long enough for you to make a purchase, that one box would be enough. You could buy the box, and play MTG. Sure, in a few months you'd go out and buy a booster pack for fun, but that would be an occasional treat rather than a weekly requirement.

In short, Portal was playable.

What modern Magic can learn from Portal

Modern Magic the Gathering is also playable, and on many levels and in many formats. I know that. But I think the Portal model was a bold step for the game, and I wish it could bring forward some of those little innovations. Of course, it can't now, being too old. But as players of MTG, we can. If you're introducing a friend to MTG, or if you're just learning it yourself, don't be afraid to use "normal" terminology in addition to the official jargon. Keep repeating the normal terminology and the jargon together until hearing one is like hearing the other. Don't be afraid to tell your friend that they can and should just buy and play a starter deck for the first few months, if not for years if they have no interest in the MTG "scene".

Magic the Gathering is too great a game to be obscured by its own complexity. Make it friendly, and play it often.