You may know Magic the Gathering as a card game, but many Magic the Gathering (MTG) players also know it as a multiverse of rich lore and exciting tales of adventure. Wizards of the Coast, the creators of MTG, have published books (both hardcover and online) and comics about the characters and locations that appear in the game, and people follow the story with genuine interest. In fact, there are players who all but believe you're not even playing Magic the Gathering unless you understand what's going on in its fictional multiverse. I've kept up with the story-line of MTG for a long time because, as a fan of the world, that was the easiest way to get a reasonable look into it. But once I started playing the game, I was surprised to find that the story and the game actually did connect in some surprising ways. Now that I'm playing the Pathfinder adventure card game, in which a very clear and linear story is expressed through cards and mechanics, I've been thinking a lot about the difference between its narrative and the MTG story-line. I think there are great storytelling and game design lessons one can glean from both, but in this post I'll focus on the many ways Magic the Gathering tells its story.

In any basic film-making course, you learn early on that the golden rule of this visual medium is that you show your audience information rather than tell. In fact, the ideal movie, in theory, requires no words at all. The visuals would communicate the story without need for speech, much less title cards. That was the theory, any way, but in practise you don't get many silent films these days, because it's pretty awkward and unrealistic for a great number of humans to interact with one another without a word spoken.

It's intriguing to me, though, that Wizards does consciously choose to tell the story of the Magic multiverse rather than show it through the visual artwork that defines MTG. The artwork of Magic is unparalleled. It's what drew me into the world, from the first time I saw a Magic card. Some of the greatest modern fantasy artists are found on Magic cards, and the art direction ("art orders", as it's manifested in the industry) is second to none in both quality and quantity. With art so evocative, why would Wizards choose to tell the story of the world with clunky ol' words?

For instance, you could easily imagine a Magic card depicting important moments of Urza's saga, or between Jace and Vraska. And while there are some cards that depict specific events in the story-line, it's not generally the way of things. The artwork offers mostly portraits, sometimes more demonstrative than others. Whether it's of a person, place, or thing, a card rarely conveys moments in a definitive story-line.

This makes the cards all the more timeless, I think, because they can usually apply to any story, including the one being told during each MTG game.

There are many ways a story could be told. It could be done in comic form, or as a podcast, or as published books, videos, or on the cards themselves. But Wizards publishes the story as free content on its website. If you want the story, you read the story. It's free, to be enjoyed by anyone. And it's strictly opt-in. You don't get a story booklet each time you buy a pack of Magic cards.

The number of people invested in the story-line is a tribute to the rich world(s) that MTG has built. Heck, the worlds now even span a greater expanse, having crossed over officially, on several occasions (Ixalan, Ravnica, Theros, and more) into Dungeons & Dragons. 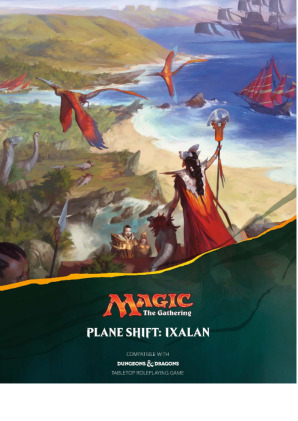 The story, while bound to the cards in many ways, is arguably a separate offering. And being free to enjoy, it's the perfect bait for both Magic and Dungeons & Dragons. You can observe all you want, and because the content is so good, you can buy in whenever you're able (and in the case of D&D, the basic rules are free too, so there's really no barrier to entry).

I think Wizards must have realised early on that if their game was going to be reborn every year, as it arguably is when a new set of hundreds of cards is released (or, if you prefer, when a set rotates out of the Standard format), then they needed continuity. Without a story to unite each new set, the seams between each are uncomfortably obvious. In fact, a cynic might even accuse them of, essentially, re-releasing the same game every year. Even if not exactly true, that's a frightening prospect to all sides of the equation. Players might feel silly for buying and re-buying cards that are unquestionably variations on the same theme (how many versions of a 2/2 bear cub can you actually have?), and the company needs to keep producing more cards in order to sell (or re-sell, if you're a cynic) the game at the same pace each year.

"Disguise" each set as a new chapter in an ever-evolving story, however, and everyone wins. The players have an excuse to buy into the latest development of a tale they're invested in, and the company gets to employ artists to write the story, draw the story, and design new game mechanics.

Cynic or not, it's an elegant solution. The audience shows up for a story and a game, and Wizards gets to deliver. Those who aren't interested in the story can just play the game, and those not interested in the game can just follow the story (it seems unlikely that anyone would do that, and if so then I'm a notable exception, because I followed the story long before I played the game).

Humans love discovery. I mean, we really love it. I've done a good amount of teaching, and I notice that even when you tell someone exactly what's going to happen if they take some action, they're still delighted and amazed when they experience something for themselves and as the result of their own direct action. For each one of us, when we discover something new, we deeply feel, if not believe, that we were the first and possibly only one to experience it.

When a Magic story describes a place or a monster or a planeswalker, we each get an idea of what it must look like, or else we assign a generic stand-in for it and continue reading. Either way, the existence of that thing has been established in your mind. Inevitably, when you see the latest set of cards, some of those places and figures that got implanted in your brain are revealed through artwork. When that happens, the sense of discovery can be elating. Even though you knew, logically, that all other MTG fans are making the same discoveries, it feels like you've bravely delved into an unknown world and uncovered secret artifacts, famous figures, and forgotten places.

The magic of Magic

I think the story of Magic is an enhancement of the setting. The cards suffice, but the story makes the experience all the more enjoyable. It's an impressive balance. Whether you just enjoy good fantasy fiction or a good fantasy game, Magic can provide.

All art copyright by Wizards of the Coast.