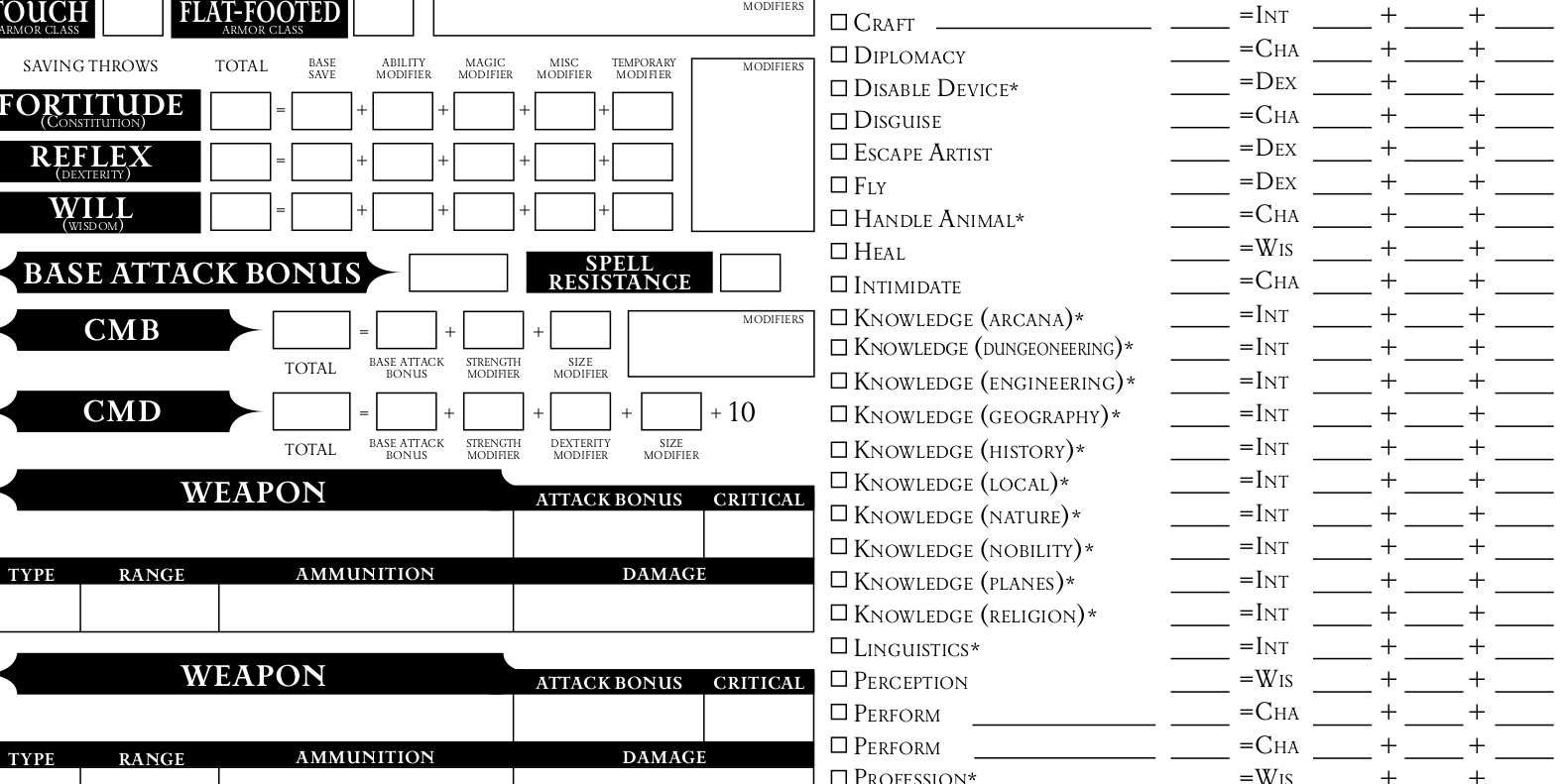 There are alternate versions out there, and many of them very good, but using a new character sheet is almost like using a new set of rules entirely, because you have to re-learn where everything is located on the page. One of the groups I play with tends to run Pathfinder just as often as 5e, so it occurred to me that it might be useful for us to have a sort of standardized character sheet layout, regardless of the system we happen to be using. They idea is that whether we're playing Pathfinder or 5e, our muscle memory is retained, and when we refer to our character sheet in the heat of battle, we know exactly where to find the information we need.

My players love the simplicity of 5e's character sheet, so I thought it might be interesting to try to adapt the 5e character sheet to the 3.5 system.

Seems like a crazy idea, right? D&D 3.5 was infamous for rules and precision and detail. Surely Pathfinder's overwhelming variety of options and subcalculated values could never be contained within the simple "rules lite" pages used for 5e?

Actually, it works surprisingly well, and with only modification rather than redesign. The most common areas of reference were able to stay in place so that players don't have to think about where to send their eyes (no more looking on the right side of the Pathfinder page, but the left of the 5e page, for skills, and so on). There are some minor changes, of course, but I tried to contain the changes to areas that player's don't need to refer to every other turn.

The easy stuff were the Ability scores and mods, Weapons, and Equipment. They were able to stay exactly the same between 5e and Pathfinder layouts. 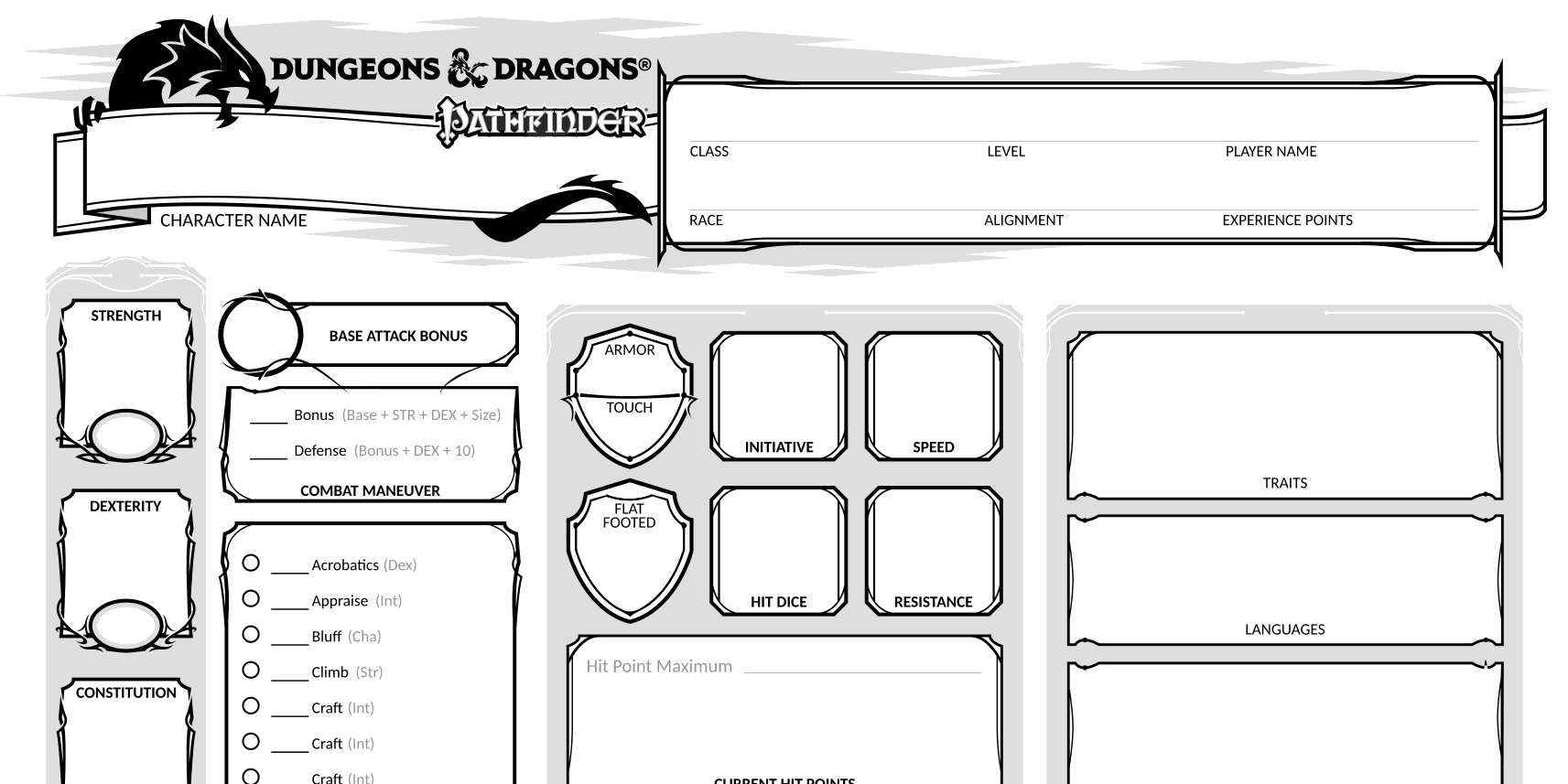 I swapped Inspiration and Proficiency in 5e for the Base Attack Bonus and Combat Maneuvers in Pathfinder. It's not an exact match, and my original redesign had Fortitude, Reflex, and Will saves there as well, especially since that's where the 5e Saving Throws were also located. However, the list of Pathfinder skills were indeed too numerous, so I had to either compress the skills (and losing white space is counter to the effort of making the Pathfinder sheet less intimidating) or move some boxes around.

As a result, Saving Throws got moved just under the Ability scores. To fill space, I moved money boxes into the same bottom left corner (I always felt they took up too much room in my gear box in the default 5e sheet anyway). This places saving throws approximately where they are located on the Pathfinder sheet rather than the 5e sheet, which I guess is a fair compromise, and at least they're in a logical place, nestled snugly along with Ability scores and Skills.

Since Pathfinder has no equivalent to formalized Bonds, Ideals, and Flaws, I used the 5e personality block for Traits, Languages, and AC Items. Below that, there's space for Feats, in the block 5e uses for Features and Traits.

Once I'd completed the first page, I realised that most of the must-have information for Pathfinder actually does fit onto a single one-sided page, just as it does in 5e. The difference in designs is less about required slots than detail provided. For instance, about half of the default Pathfinder character sheet is occupied by multiple slots for weapons, and each weapon slot makes room for every possible weapon stat: range, bonus, damage type, damage die, and so on. The same goes for equipment and armor.

So the second side of the page is available for whatever the player needs. In 5e, three pages are provided: the main character sheet, a character back story sheet, and a spell tracker. The back story and spell tracker required only minor adjustment for font and consistency.

Looking for Pathfinder 2e? I did a Pathfinder2 5e character sheet, too.