This is the first Ilya Kuryakin episode, and a few other things are turned on their ear as well. For whatever reason, Solo has a sprained ankle or something and isn't able to be sent out on a mission. I don't know whether Robert Vaughn was busy or whether the producers just wanted to feature Ilya. Another quirk of this episode is that Leo G. Carroll plays both Mr. Waverly and Quentin Lester Baldwin, Mr. Waverly's cousin.

This week's heroic guest star is Susan Oliver, playing Ursula Alice Baldwin. I recognized her immediately, despite her lack of green skin in this series, as Vina from Star Trek's pilot. 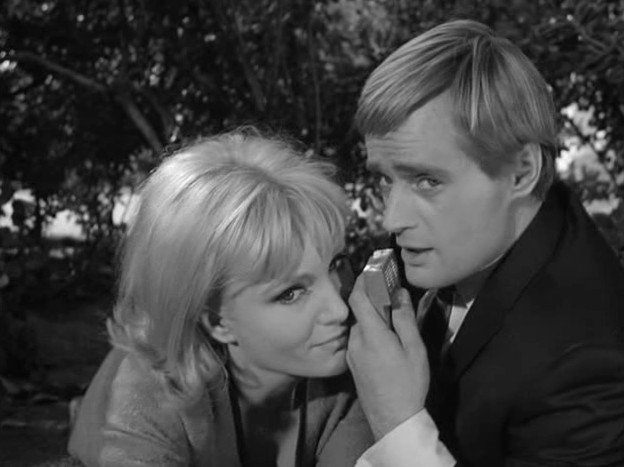 The main scheme driving the plot is intriguing. A group of investors are attempting to intimidate share holders into selling out. Their latest target is Mr. Waverly's wealthy cousin, so Ilya is sent in to protect and investigate.

As usual, UNCLE manages to do pretty well right up to key moments. Ilya is forced to go on the defensive for a while, but he's able to turn the tables after consulting the local veterinarian.

As the show title implies, the central villains, after the villainous investors, are dogs. It's a little confusing, because Baldwin introduces us to his own guard dog very early, which I assume is included as a red herring. The baddies are also using dogs, and they train them to viciously attack specific targets on command. 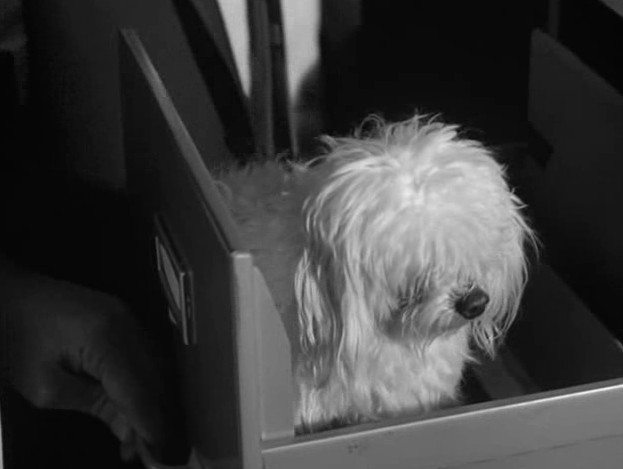 While the veterinarian character is pretty whacky, and the two solutions to the dog problem is clever, I feel like the dogs are the weakest part of the episode. Or maybe the dogs would be more interesting with more interesting owners. Neither the dogs nor their owners are particularly engaging. We don't see much of them, and when we do they're just making threats.

There's also not a whole lot at stake here. Sure, the investors want to get rich quick, but they're not going to overthrow a government or assassinate somebody important. They're just run-of-the-mill criminals. As if to make them more intriguing, they happen to be Roma and so are potentially practicing some supernatural control over their dogs, although that of course turns out to be incorrect. I think their target being Waverly's cousin, and having Carroll play the role, was probably an attempt to get the audience invested in the conflict, but we don't actually see Baldwin that often, so our level of interest is relegated mostly to how much we care whether Ilya and Ursula get together in the end.

This wasn't the greatest of UNCLE episodes. All of its problems would have been an easy fix, in theory. The baddies ought to have had a bigger end goal (world domination, extortion of ONE MILLION DOLLARS, funding a terrorist group, whatever), they should have had some dialogue that wasn't "kill! kill! kill!", and maybe there could have been fewer encounters with the dogs. Once you escape the killer-dogs, the threat level just isn't there any more, so it probably should have been saved up for the big finish that we all know is inevitable, and then we're pleasantly surprised by Ilya's brilliant plan to thwart them without firing a single shot.

But that's not how it happened, and so Ilya's first feature episode is a little lackluster. As I understand it, though, Ilya became a fan favourite later, so I anticipate better attempts later in the series.