New discovery. The fourth-wall-breaking introduction is actually part of the opening titles. They happen again in this episode. I've got to admit, it's pretty tedious to sit through more than once, and I don't recall seeing these introductions when I was watching this series long ago, so I assume it eventually goes away (probably after season 1.)

The actual opener of the episode is, some very fake British accents aside, an absolute pleasure. It's straight out of The Avengers. Modern day pirates attack. Their primary demand? "Now, I'm going to ask you only one question, ladies and gentlemen. Please consider it carefully. Answer honestly. I pledge my word no harm will come to anyone who gives me a truthful reply. Are there any among you who can tune a piano?"

As with, I imagine, most people finding themselves on the planet Earth, I'm constantly amazed by just how disconnected some folks can get from reality. I frequently remind myself that this isn't a new phenomenon but it's hard to take that to heart sometimes. This episode is an excellent reminder. It's a story about, essentially, a cult, and it even explores why the cult mentality appeals to people, and just how far they'll go to preserve the fantasy world they build for themeselves.

The guest stars are Robert Culp and Sue Ane Langdon. The latter is an abrasive and whacky housewife who gets mixed up in UNCLE affairs, and she plays the part well. She never goes overboard (so to speak), and the whole episode is the most light-hearted so far. 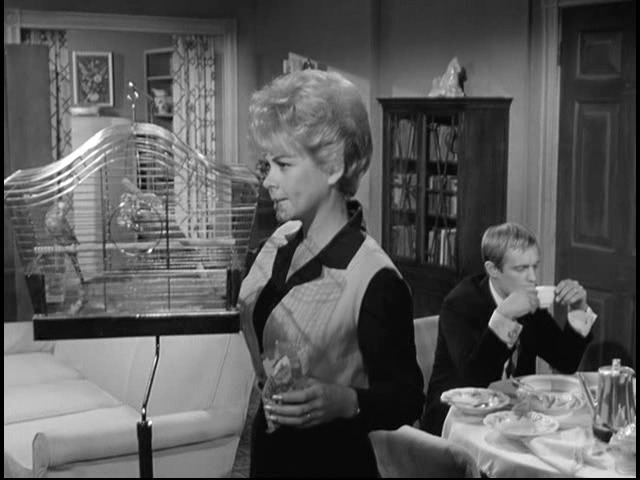 I was afraid I wouldn't like the inevitable "fun" episodes, but this was a good one. The level of silliness never exceeds a typical Avengers episode, and while the subject matter is actually very serious, the story is told with an ease that spares the viewer too much anxiety. Whether you want anxiety from your spy show or not is a personal choice. I think I mostly do, and it's one reason I think I just don't care about, say, James Bond. I could never get invested in any of the stories enough to feel apprehensive or threatened by any of the events. Ultimately, though, I did enjoy this episode, and I identified strongly with the subject matter, if not in a literal sense (I have never been involved in piracy on the high seas) then at least as a reassurance that human nature still hasn't changed.