Arguments of quality and quantity aside, I'm of the opinion that you can never have too many RPG modules. And short "one-shot" adventures are, for me, priceless. If D&D is both a game and a hobby, then it's the one-shot modules that make it possible for it to be "just" a game. After all, people don't get cold feet when starting a game of Monopoly, wondering how many months they'll have to return before finally finishing the game; they sit down, they play the game, and then they go home. Sometimes, you have a group of friends over and you just want to play a quick game of D&D, with the expectation that the experience will start and finish in one sitting. 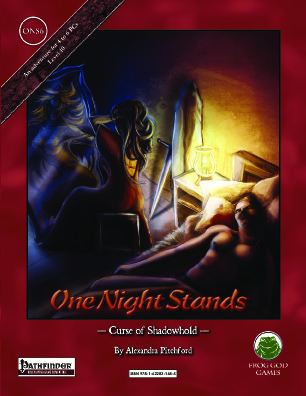 The fear, I think, for many veteran D&D players is that a one-shot game will turn out to be narratively unsatisfying. However, that is not a fear you need have with Curse of the Shadowhold by Alexandra Pitchford. This 15-page Pathfinder (D&D 3.5) module delivers everything a good D&D adventure needs: a dungeon crawl, just enough of a mystery to give the crawl purpose, and a compelling backstory revealed at the end.

The module is written for 4 players at level 10, so it's arguably not a great adventure for first-time players. New players can play this adventure, but if you hand them a level 10 character sheet filled with feats and spells, they may find all of the options overwhelming. If you're going to run this with new players, you may want to either simplify the character builds, or else use handouts (like spell cards, feat cards, and so on) to help clarify what their characters can do.

The adventure hook is a rescue mission, but the module starts in a generic fantasy city where the players encounter a group of thugs accosting a wood elf. Once they overcome the thugs, the elf thanks them by bringing them to his own hometown, where they receive the main quest. If you exclude this introductory sequence, you can cut the module down to a mere 5 pages; just tell the players that they've been summoned to the Elven forest village of Golden Oak, and start at Chapter 2 (of 2) of the module.

The hook, whether delivered after a street fight or at the very beginning of the game, concerns a group of elves who have gone missing in the forbidden ruins of Shadowhold. The players are asked to rescue them. There's a random encounter between Golden Oak and Shadowhold, a great way for the players to warm up to their characters's abilities and fighting styles, and then they reach the dungeon.

The dungeon is a fine little dungeon. It has a monster or two, a trap or two, and a big boss at the end. It may not be the most amazing dungeon ever created, but it's a great one-shot location and has all the essentials for an evening of dungeon crawling fun.

Most of the monsters come right out of the Pathfinder Bestiaries, available from your own bookshelf or from online stat sites. I appreciated this, because it meant that I didn't have to learn new monsters to run the module; most of them were either familiar to me, or familiar-enough to make running them easy.

What the dungeon doesn't contain is loot. There's nothing to pilfer until the very end, which initially took me by surprise. I like throwing fun loot at players during one-shots, because loot is fun and in a true one-shot it's ephemeral. However, loot can also slow a game down, so the choice to keep the dungeon void of loot and only selectively populated with threats is useful. The players move from room to room fairly quickly, only pausing to meet an immediate and obvious threat. There are a few rooms, like the library, for players to explore, but mostly the dungeon is a direct path to the big boss. The filler content will surely be generated by the players themselves.

The final confrontation is simple and direct. The players encounter the evil force causing all the trouble, he kindly explains everything they need to know to solve the mystery, then they fight, and treasure is dropped upon success. It's exactly the kind of ending that a one-shot needs. It's definitive, leaving no questions of its already simple plot unanswered. It even provides the players an opportunity to chat with the big bad, since he doesn't attack until the conversation ends.

It's also resilient to player death or even a total party kill. The fate of the world isn't hanging in the balance of this adventure. If a character dies, they get to see their comrades continue fighting until the party succeeds. Should the party fail, they become yet another lost adventuring party to the curse of the Shadowhold, and the DM wins.

Wrapping up the larger story depends entirely on what the players report back to Golden Oak (or whether they return at all). If the curse is lifted, the elves of Golden Oak may prosper, with the players becoming trusted friends of the village. If the curse remains, the elves become reclusive and guarded. If the curse is lifted but those responsible are not brought to justice, then still other endings are possible. Or you can choose to omit the wrap-up entirely, ending on the high note of the players's resolute combat.

This one-shot adventure is one in the One Night Stands collection published by Frog God Games. As I play others, I'll probably post further reviews. For now, suffice it to say that Curse of the Shadowhold is a nice, simple, enjoyable adventure for intermediate to advanced players (or new ones, assuming they get help with their level 10 character builds).