If your idea of Friday the 13th is typical B-grade horror about unsympathetic teens being killed by a guy in a hockey mask, this is the movie that starts it all. Yes, it's the third film in the series, but the first one is actually a very good movie with more relation to Psycho than Texas Chainsaw, and the second was a pretty good continuation. This movie, however, breaks the mold in every possible way. 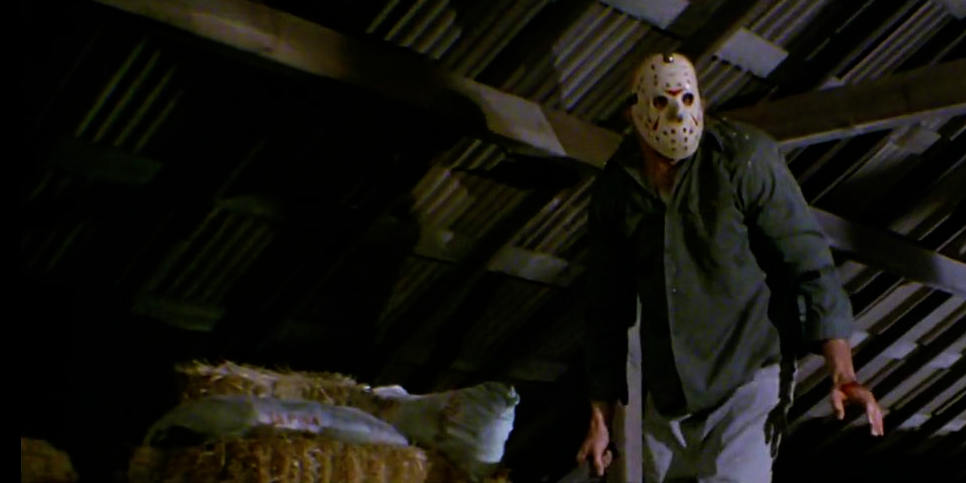 First of all, this movie was shot in 3D. That means very little to the modern viewer, unless you can find a 3D copy of it and have a means of watching 3D movies, but it does have some affect on how the film was framed and edited. I can't help but feel that the film was restricted by its use of 3D, because even though the first two movies were fairly traditionally shot, this one seems less inventive, relying heavily on gimmick shots of snakes or arrows flying toward the screen, or baseball bats or pitchforks poking out at the camera. And the 3D gimmick, combined with the literal disco music it uses for its theme, suggests that Friday the 13th had found an audience and was striving for whatever mass appeal possible for a movie about innocent people being systematically murdered. Given its popularity, seems like the bet paid off.

This movie moves the action out of the camp grounds, too, and has Jason terrorizing people in the local community. Two shopkeeps are murdered early on, and then a small motorcycle gang, and then on to the requisite teens.

The teens have changed, too. They continue their march toward the defining trope of horror movies, most notably adding in a kind of self-referential horror movie geek who is also a toxic "nice guy" in his seething dissatisfaction for not being popular with the girls. The group is more or less an interesting bunch, but somehow they're all just a little bit more annoying. They're crass, and rude, and there's more in-fighting. This is the group of teens you want to see murdered. These are the teens you read about in the film critique books; the ones who are too dumb, too immoral, and generally too unpleasant to "deserve" to live. This is the beginning of the all but explicit urge for the audience to cheer for the monster.

This group has their own stories, just like the groups of teens in the previous films, but the stories are more obvious and explicit. For instance, you never really knew what was going on with Alice in the original movie. And you never really knew what Mark (the one in the wheelchair) had planned for his life, or what Vickie had planned for him (well, you have an idea, but you never get the details). This movie somehow loses the mystique for the sake of setting up murder victims quickly and efficiently. It works. But not to the same effect.

Jason in particular begins his journey into immortality in this movie. He starts to overshadow the Friday the 13th brand, and the filmmakers start building the Jason brand in earnest. He gets a lot of screen time, and he gains his iconic hockey mask. More importantly, there are hints at his in-world immortality, as he rebounds from an impossible variety of bludgeoning, slicing, cleaving, and snapping.

Trilogies are for closers

Even as the filmmakers set Jason up to be a big star, there's every indication in this movie that it might have been the final chapter in the series. Jason has become the biggest and baddest boss, an impossible and relentless foe, but he is ultimately conquered. He is left lying dead on the floor of a barn, an axe buried in his skull. The series might have ended here, and if it had it would have been a respectable trilogy. While there was no hero's journey, by any means, there's definitely an anti-hero journey, and that would have been a satisfying ending: they set Jason up, he achieved ultimate villainy, and then fell.

And yet, even in this movie, there's the hint that they anticipated the chance that there could be more to come. Even with Jason definitively vanquished, there's the twist of reality at the end, in which Jason appears, presumably only in the mind's eye of the sole survivor, to terrorize her from beyond the grave.

What comes across most in this movie is Jason himself. He's a very specific kind of monster, one we assume is driven by the memory of his mother, or maybe his own strange childhood. We don't learn how he came to be disfigured, but he obviously knows he's monstrous to look at, since he keeps his face covered, one way or another. While Part 2 flirted with compassion for Jason, this one reveals him to be a true brute. He's not too bright, he's easily frustrated, but he's unnaturally strong and determined.

The biggest surprise is that these meager ingredients, already stretched thin over three movies, actually works. Jason is a walking punching bag with a machete, but he's captivating, terrifying, utterly silent, and blindly dedicated.