Friday the 13th 400 years in the future and on a spaceship. A spaceship named for a D&D dragon goddess (Tiamat, so technically it may have been named after the ancient Babylonian religion). A stalker onboard a wounded spaceship, a spacewalk to survive. This is, easily, one of my favourite in the Friday the 13th series. 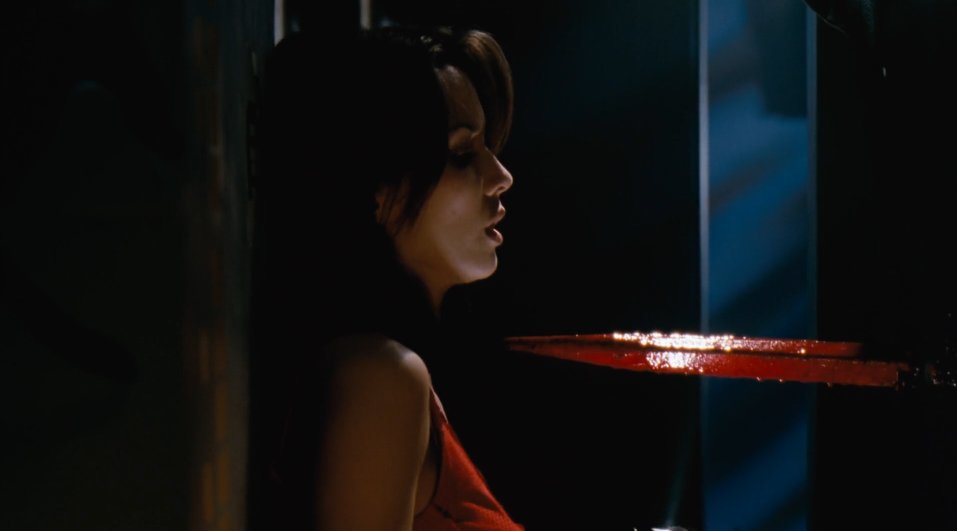 This one opens with Jason having been apprehended by top government officials. He obviously escapes, killing everyone in site, until he wanders into an experimental cryogenic chamber and is frozen. End intro, roll credits.

Well, not quite. For whatever reason, the studio chose to roll credits at the very start of the movie, blending what is obviously the traditional Friday the 13th teaser with the actual movie. I, myself, have edited my DVD rip of this movie to repair this atrocity, and frankly it is far superiour. I encourage you to spend an afternoon doing the same, or if you're familiar with Linux and FFMpeg, 10 minutes (your times may vary, depending on your source, but these at least get you in the right ballpark. I use mplayer to determine timings):

Once you've done that, you have a much improved experience.

The mix up over the intro and credits aside, the movie's opener is perfect. It's predictable yet tense, and it sets us up for the rest of the movie.

The cryo chamber is, admittedly, pretty amusing. There's no special prep for it; people are just freeze-dried quickly, without ceremony, and magically without frostbite. It's also not clear on how it remains powered for 400 years once everyone on Earth abandons the planet for Earth 2.

But that also sets the stage: this isn't a science fiction movie, it's a sci fi flick. This is Jason in space. New speculative scientific theories are not being invented for this movie. Hyperspace is not going to be explained to you. There are spaceships, and blasters, and androids who can be upgraded (actually "uploaded" to use the exact quote, but I'm pretty sure they meant upgraded) as quickly as Tommy shaved his head in Part 4 to mimic Jason's boyhood (even though it's not clear how Tommy could have known that Jason was balding as an 11 year old child).

I'm perfectly happy to accept the flimsy futurism of Jason X. The thing that counts more than sci fi to this movie is its Friday the 13th lineage, and this is one of the most tense movies in the series.

Once Jason is awakened in the future and starts the requisite slaughter, the perfect Friday the 13th is established: a bunch of teens on an archaeological field trip, isolated and trapped in a spaceship with an elusive killer. This group of teens is the right kind of group, in my opinion. Unlike in Freddy Vs. Jason, which I can only hope took its cues from the Nightmare series, these are likable characters with varying degrees of interesting back stories. The audience doesn't need these people to die, and in fact you don't really want any of them to die. You might dislike one or two of them, but if you remove Jason from the movie, it might have been fun to hang out with them on a spaceship to see how their field trip turns out. 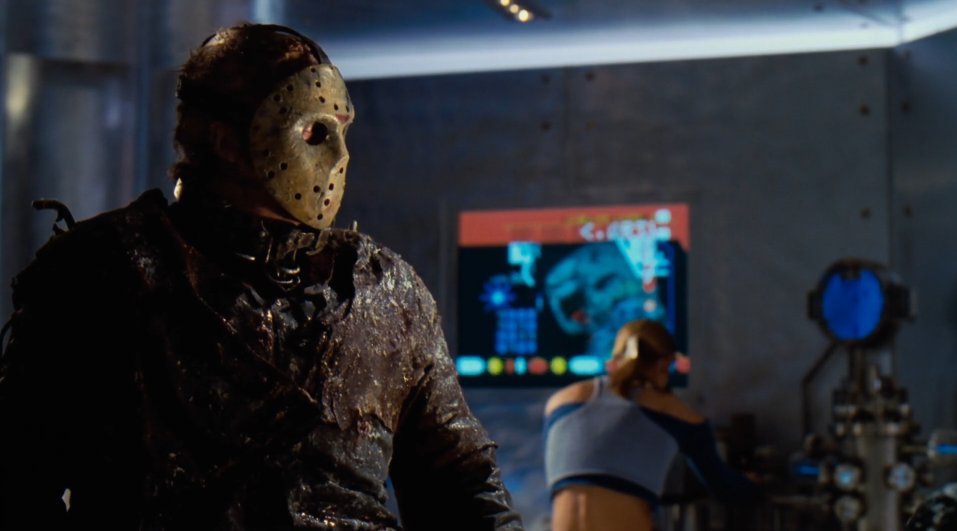 The action picks up in the end, and in ways I don't feel all Friday movies do. The closest approximation is Jason Takes Manhattan. Like that movie, this one introduces a double-threat: our heroes need to get away from Jason, but also off of a ship that's falling apart around them. And at every stage of their journey, there's a new, unexpected complication of nearly every variety.

In fact, it's amazing what goes wrong for them, but each time something does happen, your gut instinct, at least if you've ever tried anything remotely difficult in your life, is complete unquestioning belief. There's no suspension of disbelief required here, because everything that can go wrong does go wrong, and sometimes even the things that shouldn't have gone wrong, end up going wrong. The final hour of this movie depicts the most true-to-life sequence of events this side of sci fi.

I'm not sure exactly sure where it came from, but a lot of characters in this one get one-liners. It feels out of place to me, but they are very deliberate. I guess by this time, the concept of quotable over-the-top quips had become enough of a movie-wide joke that Friday the 13th felt like they needed to follow suit. I don't think it's a reference to previous Friday movies, or else it's a rich tradition that I've somehow sublimated.

In this movie, though, the worst puns and jokes are made right at the moment of death for at least three people, but I guess that's just what audiences had come to expect. It's funny and I don't mind that it happens, but I also admit that it's not necessarily something I look for in a Friday movie.

There's also some self-referential humour about that old morality-tale trope. In an impromptu virtual reality that the android drums up, a mash-up of several elements from previous movies is acted out as a distraction for Jason. The self-awareness is a little awkward if you never bought into the thing being referenced in the first place (that Friday the 13th is a morality tale in disguise), but the bigger problem is that the illusion works. If you can distract Jason with virtual reality, why not just make his victims in the VR world impossible to kill? Presumably, he'd never give up, and keep trying to kill the virtual people for as long as the VR lasts. It's a foolproof Jason trap (of course, that's what the scientists said in the intro, too).

By the time this movie came out, Scream and Final Destination had been released, both pretty influential horror films in their own right, but also heavily, famously, referential. Scream especially is still seen by half of any audience as a parody and by the other half as a horror movie. So by the time Jason X was released, Friday the 13th was an acknowledged progenitor of the genre.

A lot of what appears to be self-referential in Jason X is less about what Friday the 13th has been or even how it has been perceived, and actually a reference to movies that referenced Friday the 13th. And many or all of the references in this movie very much feel like it. If you know the series, you don't see the meta gags and think back to an earlier movie when something similar happened. You see the gags and think of how strange it must be that some people out there actually think that's what Friday the 13th is or ever was.

Since Part 4 or so, the Friday the 13th movies have gradually developed Jason as the consistent star of the show, moving him from a psychopath with mommy issues to a literal monster, and then to a supernatural metaphysical force. In this movie, despite his name taking precedence in the title itself, Jason is actually a background character. He's just as much a force of destruction as ever, but he's more or less a Xenomorph from Alien. We rarely, if ever, see the world through his eyes as we often did in earlier movies, he's not dealing out backwards Death Wish justice as he did in Part 3 and Part 8 (or even Part 10, if you count fighting Freddy). As with all excellent Friday movies, this one isn't about Jason Voorhees.

This movie is the story of the crew on the spaceship (or what remains of them after the first half of the film, anyway). Jason is the ticking time bomb. 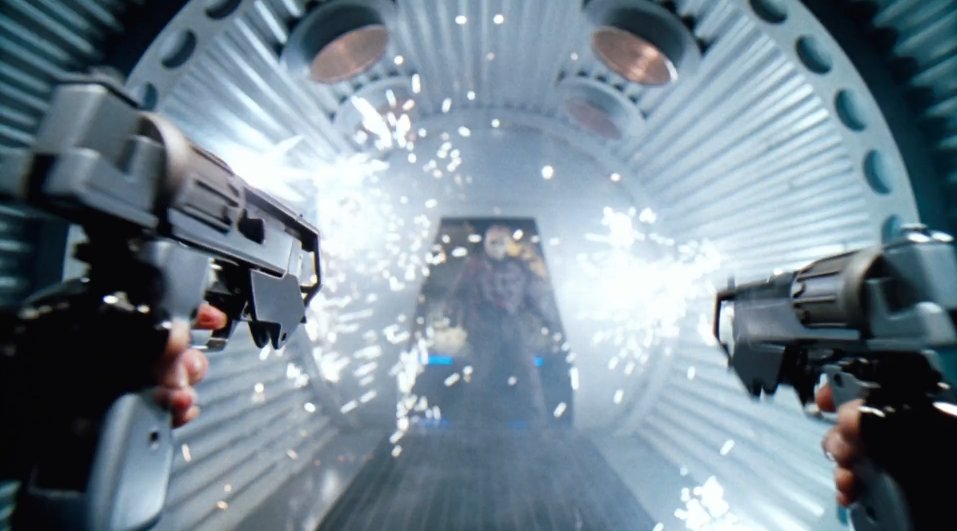 The combat action in the movie is mostly good. Jason's kills are inventive and brutal, and his timing is impeccable (the approach at Solaris is a brilliant sequence and a brilliant plot twist). Admittedly, Jason's fight with the android probably looked better on paper than it ended up being on screen. But the really exciting stuff is the frantic pacing. The urgency to take care of Jason once and for all, and then the acceptance that such a scenario doesn't exist, and finally the realisation that escape is the one and only way to survive.

Rowan, the main character, is pragmatic and sympathetic. She's smart, compassionate, and brave enough to do what needs to be done. She makes for an entertaining survivor character (not a Jason killer, though), and manages to make her way through the film with some interesting disadvantages (she's not very technical, so she ends up relying on the rest of the crew for many of the emergency tasks). She's up near the top of my list as one of my favourite survivors.

The Jason killer in this one is Brodski, a no-nonsense sergeant full of bravado and war-weary wisdom. And he's easily one of my top favourite Jason killers. It's an honour he earns more than once through the course of the story.

Being the last film released in the series, this is the grandest of finales possible. It sends Jason into space and into the 25th century. It propels Friday the 13th into functional immortality, at least fictionally (I feel it's safe to say that it's already made its mark on movie history in real life). It's bombastic and absurd on paper, but its execution is a pleasure to watch again and again, and it's a great way to end a series.