The fifth movie is the Friday series suffers a little from its setting: a halfway house for mental patients. Obviously, it needed a remote location for the obligatory murders to take place, but I find that a home for people recovering from serious mental illnesses wasn't the correct choice. Not only does it trivialize profoundly misunderstood illnesses, but the atmosphere is remarkably different from the usual camp or farm full of rowdy teenagers, and that makes a big difference to a Friday the 13th movie, as it turns out.

I found out, whilst researching how other fans interpreted the ending, that this is a pretty unpopular entry into the series, but for a different reason. The problem many people have with this movie is that Jason isn't actually in it (or is he? more on this later). However, there are many reasons that it's actually a very good Friday the 13th movie, in spite of whatever issues I have with its setting and how other people may feel about its Jason quota. 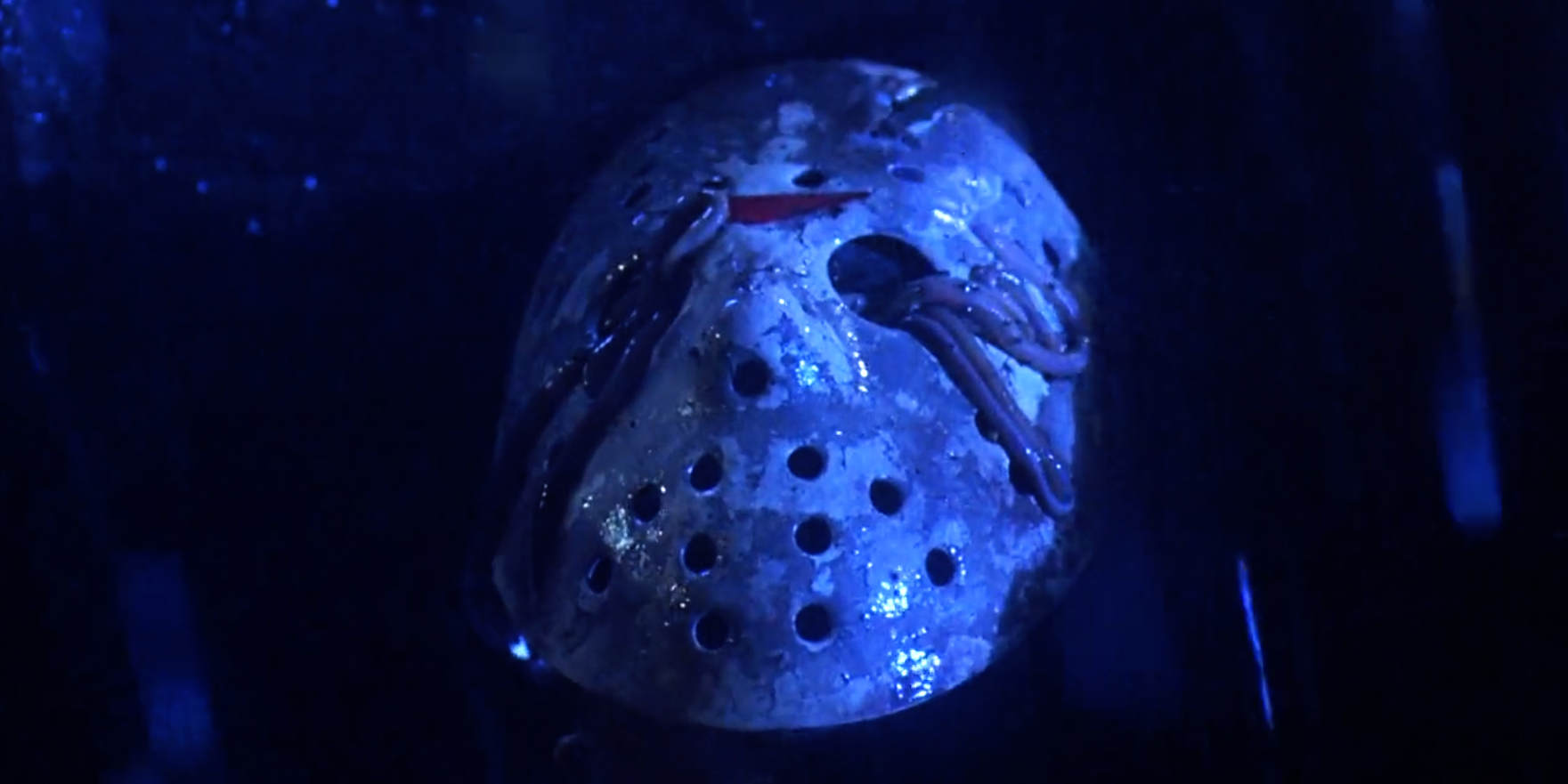 Jason, the monstrous killer that the series has been slowly building up for the past few films, arguably makes no appearance in this movie. This is a complex argument to make, and my position on it may rely on a lot more hindsight than I'll admit to, but I believe Jason is all over this film. He appears in the prologue, in which Tommy, Jason's killer, witnesses two men digging up Jason's grave. Jason rises from the grave, kills the men, and then turns his attention to Tommy, at which point the adult Tommy awakens from a troubled sleep, leaving the audience entirely unsure whether he actually witnessed the event in real life or whether it was all a dream.

Personally, I take this sequence as a metaphor, telling us that Jason is not quite dead. Indeed, you have only to look at the last shot of the previous film, in which Tommy's eyes pop wide open in a dead, blank stare as he hugs his sister to comfort her, to know that something unique about Jason's death. Tommy's dream or memory of Jason literally rising from the grave conveys, at the very least, that Jason, as a monster or a supernatural force, lives on.

And I guess that has always been my interpretation of the killer in this movie. It is, infamously, not exactly Jason Voorhees, but a medic gone mad. This is revealed in the final moments of the movie by a cop, who are notoriously unreliable sources of information (or protection) in the Friday the 13th movies, so I always assumed that this explanation was the in-world explanation of the plot, not the actual plot itself.

Maybe it's because I saw Jason Goes to Hell before seeing Part 5, but I always assumed that the cockamamy "medic gone mad" story was the unenlightened explanation for Jason possessing the ambulance worker who suddenly decided to wear the hockey mask and wield the machete. To paraphrase Creighton Duke (the bounty hunter who we'll meet in Part 9), it wasn't the medic doing the killing, it was Jason in a medic "skin suit".

Whether you buy into the medic theory [who suddenly gains superhuman strength] or the possession theory, the movie does manage to look, sound, and feel like a Friday the 13th movie. There are swift murders of characters, some you love and some you hate. It develops the Jason mythos through a broken and unstable Tommy. And it plants seeds, like the idea of possession, graveyard resurrection, and the affect Jason has upon the psyche of the survivor, that turn up in later films.

This is probably the least progressive Friday the 13th film yet, but that's probably in part due to how much horror had, by this time, come out that had learned from earlier Fridays. I don't think this movie breaks any new ground or serves as an example to anything that might follow it. The setting does it no favours. They stop just short, thankfully, of doing the asylum-is-a-metaphor trope, but the general feeling is nevertheless a little patronizing. It's pretty obvious from the start that Tommy's fears are justified but that no one is going to believe him until it's too late, and his bouts with hallucinations are only good at establishing that he's troubled, which frankly we don't exactly need spelled out; after all, we ourselves saw what he went through in the previous film, so we already sympathize.

The thing about Part 5 is that it's part five in a series of mostly mindless slasher flicks, and it's still serious about being a really good slasher film. Heck, think of how many series haven't been able to stay true to their mission statements with far fewer than five entries. Think of the RoboCop movies (if you dare acknowledge that there were sequels at all), think of the 90s Batman movies, or the Star Trek movies (I'm afraid I don't believe every other one was good), and Star Wars, and countless other franchises. Friday the 13th, if nothing else, never forgets what it is. It's a gory, hormonal, scary horror fantasy series that knows how to do a few things really really well. And that's what they do. They embody the slasher horror genre, deviating here and there to keep the formula fresh, but never straying from the main course.

The motif of differing realities continues throughout the film in small bursts, and it's usually attributed to Tommy's mental instability. However, the end of nearly any Friday the 13th movie exists in its own special pocket dimension. Ever since the first movie, the surprise Jason appearance near the close of the film is never adequately explained, and always suggests some new twist, which is generally disproved before the end credits roll and summarily ignored in the following movie.

This movie keeps that tradition not once but twice. The first false ending is a dream that Tommy has, in which he kills the film's heroine, Pam. He awakens from that dream only to suddenly be possessed, as it were, by a desire to wear a hockey mask. When Pam enters his hospital room to check on him, he appears behind her, wearing a hockey mask and wielding a large knife.

This ending, understandably, leaves many viewers with the idea that Tommy is the new Jason. If there hadn't been further films, I guess that's exactly what the ending would probably have meant. However, the next movie in the series reveals that Tommy is not a killer at all, and in fact is still obsessed with vanquishing Jason. This, understandably, sends mixed signals to some fans.

My interpretation of this is based on both the movies and the established movie world. First of all, it's obviously part of the rhythm of the movies to end around or on a false cliffhanger. The final surprise event you see in a Friday the 13th movie is either a hallucination of the latest survivor, or a peek into an alternate reality, or a cheap trick on the part of the filmmaker. Interpret it however you please, but it's obviously written into the formula, and a Friday film without it feels a little strange.

Secondly, far from being cured or freed from the curse of Jason, it's explicitly stated at the beginning of the next movie that Tommy has left a mental hospital. Given that he was at a halfway house in this movie, it's clear that he regressed rather than progressed after the events in this one. It's plausible that he either really did put on a hockey mask and attempt to attack Pam, or that he imagined that he did that, and either way, ended up in mental hospital for continue treatment.

Personally, I think he didn't actually put on the mask, since there's no rational reason for Jason's mask to have been conveniently placed in a cabinet in Tommy's hospital room. It never occurred to me to take the scene as reality.

Whatever theory you prefer, this is part of the fun of Friday the 13th. The canon of the series is simple, and yet there's so much room for debate and personalization. Did Jason really drown? Did Jason possess the medic? Did Tommy become Jason momentarily? Who would win in a fight: Jason or Freddy? (This is still unanswered, in spite of the movie, but certainly when I was a kid this was an especially hot debate topic.)