Somebody's poisoning the wheatfields of Russia with a fungus delivered by missile. Well, it's delivered by missile shot at water, which opens a hatch on the missile so a propellant can deliver the payload to wheatfields, which I guess are always situated nearby. It's a somewhat convoluted system, but apparently it's working well enough to do real damage, and so UNCLE decides to take action.

Solo goes deep undercover as Harvey Mueller, a wheat grower looking to hire the scientist, Dr. Lavimore (played by Alexander Lockwood), who discovered the fungus many years ago. It so happens that Lavimore has been missing for the past three weeks, but Solo manages to find the doctor's daughter Felica (Marta Kristen) and her fiancé Gabe (Jeremy Slate). This leads solo to a group of scientists who seem to be fond of hiring Gabe's boat for late night cruises.

It's the boat scenes that the most disquieting. Solo, posing as Harvey Muller ("a real Alfalfa type"), invites himself on one of the cruises and for a short while it feels like it's going to be an innocent, if not unlikely, cruise around the local bay. But when Solo pricks his thumb with a fishing hook as he's learning to bait a line, the scientists gather around him, insisting that he receive treatment for the small injury. Earnestly playing his part, Solo agrees, and is of course drugged.

In his drugged state, Solo reveals only that he is Harvey Muller, a wheatgrower from the midwest. He's able to do this because he was conditioned by UNCLE in antcipation of this mission, and he had a trigger phrase to switch his brain over to his Muller persona for some number of hours, at a subconscious level. I love the idea that through psychological conditioning, a role can become part of someone's subconsciousness such that even truth serum can't get them to betray anything beyond their assumed personality. It's a pretty powerful trick, though, and I can see why this wouldn't be incorporated into the show's canon permanently. I'm sure in some future episode, Solo will be drugged and be compelled to reveal all manner of secrets, although frankly THRUSH seems to have a lot of information about UNCLE as it is (they broke into UNCLE headquarter is episode 1, remember) so I can't think of a narrative reason this trick couldn't be a permanent fixture of an UNCLE agent's toolkit, but I suspect we'll never see it again.

Anyway, one thing leads to another, and eventually we arrive at a secret underwater missile base where a bunch of sociopathic scientists are trying to instigate conflict between Russia and anybody who will take the bait. Solo masterfully plays on emotions and loyalties to get people to do what he wants them to do, and in the end UNCLE is triumphant. 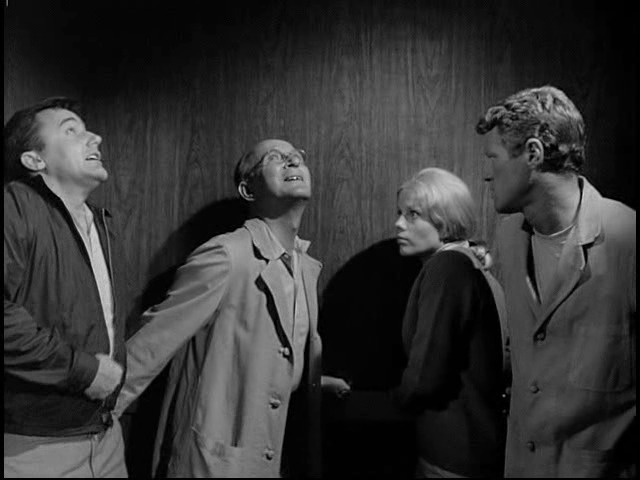 That's not to say there aren't losses, though. Felicia learns some very unpleasant truths about people she thought she knew, and I feel like this is a continuation of the show broadcasting to us just how ruthless it's willing to be, at least emotionally. It's been this way from the start, but the first time I really took notice was The Shark Affair, when Elsa's husband casually runs off and joins a cult without her, and doesn't appear to miss her in the slightest. That episode is light in tone largely because of Elsa's character, but the reality that all the people on the ship had dispassionately walked out on loved ones in order to join in the doomsday cult of a crazy stranger was not lost on me. And we'll see similar painful revelations in episodes in the near future.

I'm detecting that Heather McNabb, played by May Heatherly, is the Uhura or Yeoman Janice Rand of UNCLE. Introduced early on as sort of the brains of the operation, Agent McNabb does the research, runs the computers, the AV equipment, manages communication (she basically is Channel D), AND does the psychological conditioning required to send agents into deep undercover. In her downtime, she also finds time to relax under sunlamps and knit.

Also, she brings her dog to work. Who's going to stop her?

There are hints of a "will they or won't they", or possibly "have they or haven't they", tension between her and Solo, which I enjoy. Sure, that exists essentially with every woman Solo encounters, but narratively I understand that. If you take each episode as an isolated story, the possibility of romance, or the memory of a past romance, is part of the mood, but after it happens every single episode, at least my brain starts to compartmentalize them into sort of alternate realities. I've seen Alfie. Even in the 60s, no one man could have that many meaningful relationships. But having one constant is refreshing, because it's carried beyond the beginning and end titles that interrupt the continuity of episodic television. It's the one will-they-or-won't-they storyline that transcends the multiverse of a serial. Appropriately, it's the barest of a suggestion, too, so I'm confident that I'll never have to suffer through the answer.

The best thing is, you can't help but admire McNabb. She's a suave computer geek with all the skills and all the answers. I wouldn't be surprised if the last episode of the series had Waverly walking into a darkened office to report to his boss. We watch him as he delivers his report, and then the camera pans over to the person he's been addressing, for the reveal. It's Heather McNabb. Cue the end titles.

But I'm getting ahead of myself, and I have several seasons to go before that plot twist.