In 2014, probably not on April Fool's day, Frog God Games released the Book of Dirty Tricks, a sort of DMG (Dungeon Master's Guide) addendum containing advice for dungeon masters on how to make a game more challenging.

It's a fairly small book, being only about 78 pages, but it's packed with both pragmatic advice and ingenuity. The first chapter contains the author's house rules. They are strangely obvious, and yet sometimes it takes the act of reading to make you realise that you could be running your game this way, and it result in a more challenging experience for everyone. For instance, one rule is that all dice must be rolled in the open. This applies to even the dungeon master. Now, if you've ever dungeon mastered a game, you know that sometimes you feel compelled to lie about a roll in order to manipulate the fun. Maybe you lie about an attack against a player so that a character isn't obliterated. Maybe you lie about a saving throw so that a particularly tedious monster dies quickly. Whatever it is, most dungeon masters have lied about a roll, usually to benefit the players. The 5th Edition DMG explicitly states this is an acceptable DM tool. But this book suggests rolling all dice in the open for all to see, and maintains that because games become more lethal as a result, they also become more fun because there's real, authentic unpredictability and tension.

Another rule involves getting players lost in the wilderness. Generally, travel is summed up with a quick declaration that the players go to the place where the adventure is, and maybe one or two rolls for a random encounter. The Book of Dirty Tricks suggests allowing players to get desperately lost. And it doesn't stop there. It also suggests tracking food supplies, and enforcing rolls to forage for survival. While I admit I would love to play in a campaign as pedantic as that, but the two groups I regularly DM would simply stop playing were their afternoons spent rolling die to determine how hungry their characters got while stumbling over the hills.

Those are just two examples from, I feel, the opposite ends of the spectrum of many good ideas about how, essentially, to treat the DM as just another player instead of as a hired performer brought in to entertain a group of players, or at the very least to inject new life into the way you play. It's modular, though, so you're free to choose what you like and ignore the things that don't serve you. And there are lots of great ideas, touching on all the things you don't think about any more because you're just so used to the way you do them: initiative rolls, damage rolls, experience points, and much more.

After the house rules come lots and lots of great DM techniques. This ranges from the simple (describing door mechanisms to make doors more interesting, and a d100 table to provide you with ideas) to devious (story elements to relieve players of treasure when they make away with way too much loot).

Every bit of this book in valuable. You might not use every idea, at least not right away. Heck, you might not use any idea directly. But you will be inspired to look at the way you structure your games, and you'll get ideas for new twists on old tropes and habits. It's probably not a book for a new DM, but it's absolutely a book for anyone who is settling into a style of dungeon mastery but wants to be made to question some latent assumptions.

And in spite of this glowing review, the Book of Dirty Tricks is not what inspired this article.

In a recent Humble Bundle sale, I happened to get a PDF entitled Deck of Dirty Tricks. It turns out that Frog God Games has taken the idea of the book and put it into practice, more or less, as playing cards. Since it was a PDF, the "playing cards" were really just the layout (really just some text on a vaguely textured background) for a one-liner "trick". I liked what I saw, though, and so when I had the chance, I designed a quick back for my deck and had them printed through an on-demand service. As far as I can tell, Frog God Games doesn't actually sell a physical version of this product. 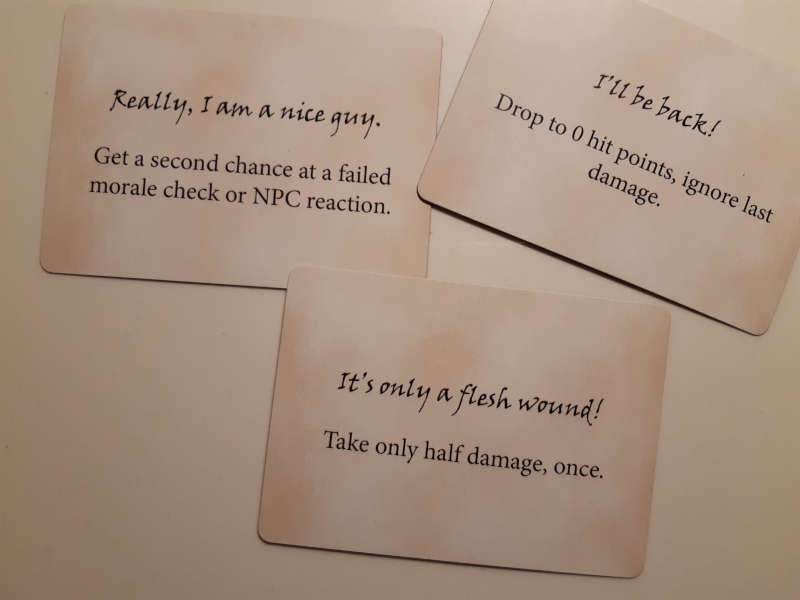 If you also can't find a physical copy of this deck (or a digital one, as this may have been a Humble Bundle limited exclusive), then this part of my review may serve more as inspiration than advertising, but the deck of dirty tricks, once you discover for yourself how to use it, is just as useful as the book.

In its deck form, Dirty Tricks is a game utility. It's something you want to have on hand during the actual game, and that you incorporate into the mechanics. In that way, it's a little like the Deck of Many Things, a well-known set of cards that throws randomness into games by providing unexpected things you can put into treasure piles or in dungeons. Similarly, each card of the Deck of Dirty Tricks contains a title and a one-liner describing some effect. The types of effects vary wildly. Here are a few examples:

As you can probably tell, some are very specific, being dependent on a specific item being in play, or being constrained to some time frame within combat or before combat, or not at all. This variation suggests that the deck isn't really meant to be a Deck of Many Things, because there's no obvious or predictable time when a card should be drawn. Some cards make sense in combat, but others wouldn't.

The cards also don't make sense as random object cards, drawn while searching a room or looting a body, because many of the cards rely on combat rounds.

And finally, in spite of the name dirty tricks, these are actually all positive effects. There's not one "dirty" trick to be found.

So the question is, how do you use them in your game? You could use the deck as one or the other, ignoring the cards that don't apply to the current situation, but what's the point in drawing cards if you have to ignore one in every three?

The solution I eventually fell upon was to treat the cards a little like Inspiration or Experience Points for players, and as part of crit bonuses for foes.

Whenever a player does something particularly clever, or when they search a location I didn't anticipate and therefore have nothing with in-game significance to "plant" there, I have them draw a card from the deck. In game, there character simply feels a surge of energy, or inspiration, or profound calm, or maybe even a vision of something in the future ("you sense that the next time you face dire circumstances, all will end well, in a way no one would ever expect"). Mechanically, the player draws a card from the deck, and may use the card at any time during that session.

I don't allow cards to transcend sessions for two reasons. First, because I'm not a library and can't be bothered to keep track of cards I have out on loan. Second, because I want the cards to be used, and it's human nature to hoard a good thing until it's necessary. I don't want the cards to become the player's retirement plan; I want them to inject life into the game. So it's a use it or lose it deal, and my players know that they'll get more later anyway.

To balance this injection of boons, I also have the deck serve as part of an enemy's critical hit. When a foe rolls a natural 20, I myself draw a card from the deck and play it immediately. If the card doesn't apply to the situation, then it's discarded and the critical hit continues as normal. But sometimes the card is applicable, so the critical hit happens and the effect of the card happens, sometimes giving the enemy the upper hand. 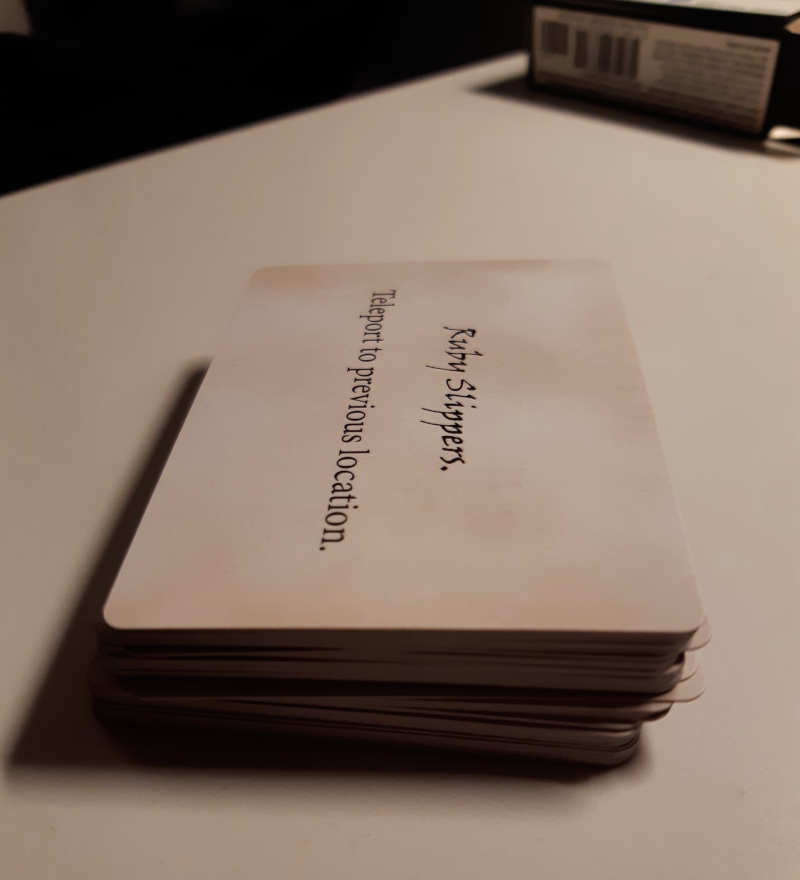 This deck of cards is by no means an essential game utility. It's uneven, it's inconsistent, it's not balanced, and it may not even be a deck you can find in stores. But it is a reflection of what its book version promoted: do unexpected things in your game, with full transparency, and the game becomes a funhouse experience of surprises. It doesn't have to be this deck, or even ideas from this book, but you might want to put thought into it, and in so doing, you just might find a way to make your game world more fantastic.