This episode pits UNCLE against biological weapons, and the opening is both morbid and sobering. Napoleon Solo and Ilya Kuryakin are in extreme hazmat suits, communicating only with gestures because their respective heads are encased in airtight helmets. They walk through a small coastal town that at first made me think of Innsmouth, but instead was more akin to The Deadly Years from Star Trek. Lots of dead people, all of them apparently dead from old age.

In the end, the two UNCLE agents firebomb the town and fly away in a helicopter. How's that for an opener.

It comes to light, after some [highly dubious] scientific analysis, UNCLE learns that apparently the whole town had been infected by an experimental biological agent dating back to World War II. The chemical was designed to cause people to age rapidly, although the explanation of how this is achieved is some of the sloppiest pseudoscience I've ever heard. I'm no biologist, but I'm pretty sure there aren't antibodies that fight against age, and yet this chemical is designed to break down the natural anti-aging antibodies in the human body. I don't know why the writers of this show apparently felt the need to explain some of the advanced fantasical elements in the show. I guess really good techno-babble hadn't been invented yet, and they just felt that the best way to explain fictional concepts was to misrepresent reality in the most blatant way possible. And yet I feel like Hitchcock was up against this pretty regularly, and he managed to gloss over it.

Tracking the biological agent in question leads Solo to Norway. Along the way, he picks up a sidekick named Christopher, played by a very young Kurt Russel. I've seen my fair share of Kurt Russel movies (The Thing, Escape from New York, Escape from LA, and so on) and it was really fun to see him as a child actor. He's got a great part in this show, serving as both the plucky accidental spy, and the comedic relief, as he continually attempts to convince Solo to return to New York to romance his poor widowed mother. 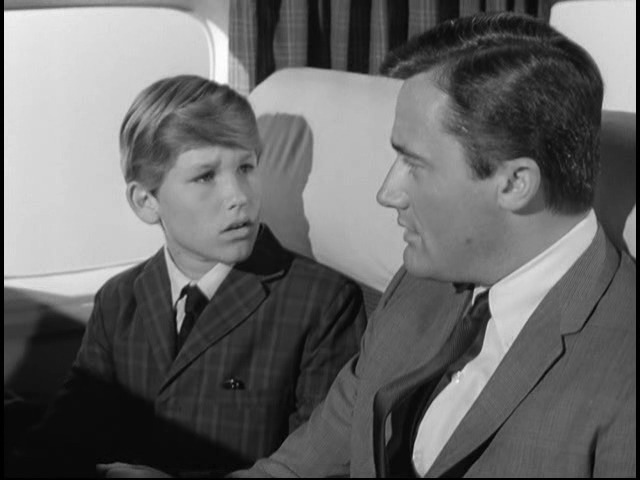 Solo and Chris spend a lot of time evading a group of thugs, and on one hand it's exciting and tense, but on the other hand I kept asking myself why Solo didn't just kill them, or spy-arrest them. UNCLE's jurisdiction is an eternal mystery, I guess.

The main villain of this episode is a pretty smart veteran of World War II, General Yokura (played by Leonard Strong). He gets involved enough to capture Chris and introduce himself to Solo when he inevitably arrives to rescue the boy. Mostly, though, Yokura bides his time until Solo leads him to the prize.

Solo tracks the chemical agent to a cave in the side of a cliff, and Yokura follows. With Chris and Solo trapped, it looks like there's going to be a seige or a showdown. Solo's in a tight spot, and seeing how he deals with that is captivating. He doesn't do anything brilliant or anything, but he's smart, and ruthless, and I was driven to vocalize my surprise at the outcome. I hadn't realized I was as far into the episode as I was, which is generally a good sign, and I wasn't quite ready for it to be over.

The main plot is a satisfying hunt and chase, the guest star is a great match for Solo, the ending is short and sharp, and the stinger is fun. Chris's mother has been an unseen constant throughout the episode, so you know there's going to be somethig about her in the end, you just don't know which way it's going to go. I'm not going to reveal the gag here, but it's a laugh outloud moment, and the perfect ending for a very enjoyable episode.