Something just isn't right. That's what you'll think very early on in this episode, and for once the whole truth isn't revealed until the end of the episode.

In this episode, Solo answers a call for help from an old army captain, or something. I don't quite understand their relationship, but I sense that it's the UNCLE version of the old James T. Kirk "I knew him back at the academy" line. Captain Morgan (Gene Raymond) needs to get a very important and symbolic sceptre out of the Generic Foreign Nation. He asks Solo and Kuryakin to do the smuggling while he acts as decoy. He sends his favourite soldier, Zia (Ziva Rodann) along with them to help.

But from the very start, you get the feeling that something doesn't add up. After Solo and Kuryakin parachute down to a drop point, a pair of "enemy" soldiers arrive and shoot at them, and yet once they've escaped the soldiers laugh it off.

And why does Morgan need the help of UNCLE, anyway? He's got soldiers and resources. He has the sceptre and he's got transportation. Why not just take it out of the country himself?

And why is Zia following them around? Sure, she's native to the region but can she be trusted? 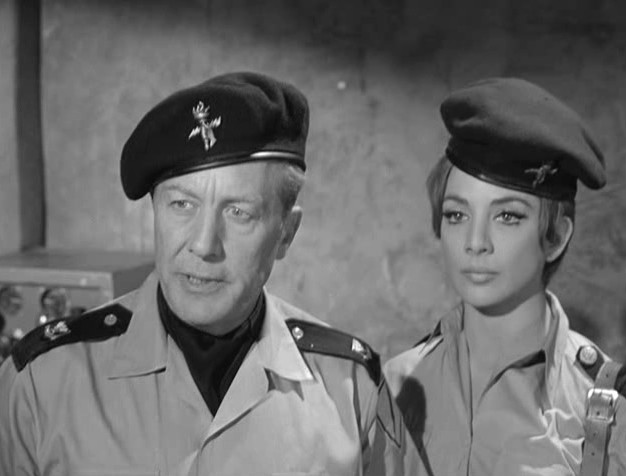 Most of the episode is essentially a chase scene. Two regional factions want the sceptre: one group attempting to sieze power, and the existing government. It's a chase from multiple angles, and because we don't know who's side to be on, most of the interactions feel wrong (in a good way). Whether Solo and Zia are escaping from the police or from the insurgents, there's a nagging feeling that we ourselves are on the wrong side. Admittedly, the insurgent faction comes across as being the "real" baddies. After all, they do have a murder pit where they apparently regularly feed captives to a bear. But if they're the baddies and the current government is good, why are we cheering for the people stealing a national heirloom?

The weakest part of this episode is the loyalty Solo and Zia have for Captain Morgan. It's weak because we don't feel any loyalty ourselves. Captain Morgan isn't a character from an earlier episode, so we're just taking the show at its word when it tells us that he deserves respect and undying loyalty. It's hard to manufacture sincere emotion for characters from an invisible past, so I understand that the audience is supposed to trust and follow the lead of the main characters, but that doesn't change the fact that there's no emotional bond formed.

The episode still works, but I feel like episodes in the past have managed to forge emotional ties with new characters effectively, but Morgan just doesn't get enough screen time for that to happen here. Maybe it would have worked better had Morgan been dead, and the driving force of the episode was Zia herself. Maybe she called Solo for help in finishing the dying wish of their mutual friend and mentor. I think in TV shows, it's sometimes easier to form a bond with an ideal than it is with a man we only see for three scenes before he vanishes into the B-plot.

It's a fine episode, though, with lots of near-misses and narrow escapes. The secret of the spectre is a surprise, and I'll not reveal that here, but the ending of the episode is satisfying and answers all the questions you've formed as you've watched.