You may remember, if you've watched the series lately, that in the previous film A New Beginning, somebody states that Jason was cremated. They were incorrect.

In this movie, it is revealed that someone paid the city to bury Jason, instead. And when Tommy Jarvis shows up in this film, on a break from the local mental institution, he is determined to burn the body. Unfortunately, he gets distracted by desecrating the remains of Jason's corpse, and inadvertently constructs a Frankenstein-style system of magically restoring life to dead matter through the wonders of convenient lightning strikes.

Quirky humour and classic horror homages aside, this opening sequence is a clever reiteration of the dream sequence that opened the previous movie, in which two men open Jason's grave to find him resurrected shortly thereafter. It's a nice way to connect the previous movie, which played fast and loose with what continuity there is in the Friday series, and acknowledge that sometimes the dialogue and visuals of a Friday the 13th movie flat out lies to you. 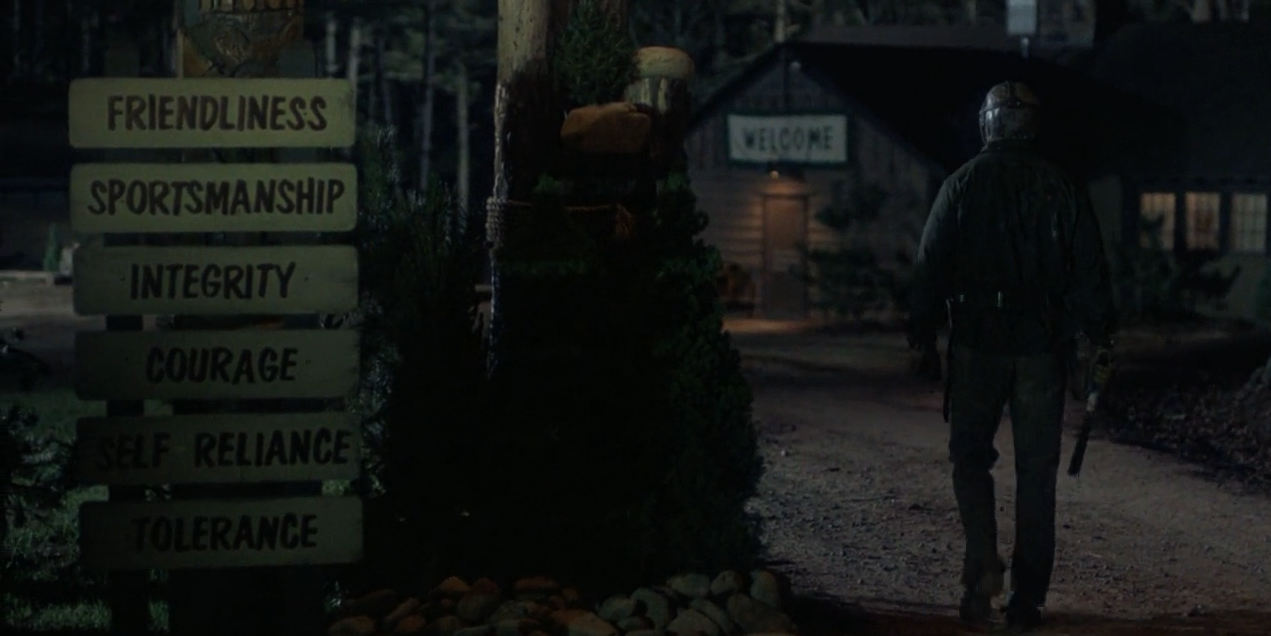 Part&nbp;6 of the series is a continuation of the Tommy Jarvis arc. He's not necessarily my favourite Jason-killer, and spending 3 whole movies on him does seem excessive (he's not really that interesting, after all), but this is a good entry into the series with all the right elements. First of all, and probably most importantly, it brings the action back to the campgrounds. It's silly to feel like Jason only works in the classic campground setting, and admittedly it's probably because the movies deviate that a return to the campground is so welcome, but there's just something about the Crystal Lake setting that feels right.

This movie heightens suspense by adding children into the camp, and this leads to a particularly revealing moment when Jason confronts a child, seemingly ready to murder her, but spares her as she frantically murmurs a prayer for protection. This, too, is a possible echo from a previous film, in which Tommy himself as a child was able to distract Jason with some hastily-applied make-up (or rather hair removal), but this time it seems to be the prayer itself that stops Jason in his tracks. Maybe there's a hint that Jason is demonic and can be halted or at least delayed by spiritual forces. Or maybe he simply hadn't encountered prayer before. Whatever the scene suggests to you, it's a surprising one, and surprising an audience interested in exactly one formula after 5 films of the same is a real accomplishment.

Most of the characters in the movie are what you'd expect in a good Friday film. There's a contingency of teens, each with silly quirks and back stories, and all of them hearkening back to the original formula. These are teens we want to see live. We don't hate them for being annoying or "immoral" or crass. Even the sex scene, such as it is, occurs without any implied judgment or even nudity. This film excellently separates the violence from the characters, or from the story that would have been told, if only Jason hadn't barged into our nice, calm summer character drama.

Tommy's main nemesis in this movie is a cop too firmly in denial to heed any warning of Jason's return. On one hand, I don't feel that the conflict between Tommy and the cop was developed enough for it to reach the extremes that it does, but then again it was probably in the movie's best interest to be efficient with a minor character conflict that ultimately is a minor detail serving only to delay Tommy's success.

How to Kill Jason

I started wondering around Part 3 or Part 4 why no one ever thought to dismember Jason, given his history even within one film to recover from a fatal blow. By Part 6, the question is especially urgent, but I guess you have to give credit to the intention to cremate Jason, even though the attempts fail.

Tommy, on the other hand, seems to have developed a theory, after reading books about the occult, that Jason can only be truly killed if he is brought back the place he was spawned. For some reason, Tommy believes that Jason was spawned within Crystal Lake. Maybe he thinks Jason did drown, but was resurrected as a demon immediately thereafter, making his birth place literally the lake itself.

In the end, Tommy manages to sink Jason to the bottom of the lake, anchoring him to a rock with a large chain. The especially puzzling thing about this tactic is that the rock is small enough that Tommy was able to move it, and the chain is just a plain old chain from a hardware store. It's not a silver chain or a chain blessed by an exorcist or anything fancy like that. So it seems to me that a supernatural killer of Jason's resolve and strength could probably figure out that the chain could either be broken with a little brute force, or else that he could patiently drag himself to shore, or even just pull himself down to the floor of the lake to loosen the chain so that it could slip right back over his head. Of all the Jason deaths, this one seems the least effective, but it is the triumphant close of Tommy  story.

Maybe Tommy's theory was wrong, but had a thread of truth. Maybe by being returned to his point of origin, Jason was rendered more or less powerless.

Lesson learnt: there's always a way to justify a choice made by a Friday the 13th movie.

Ultimately, the subtitle of the movie is correct in many ways. Jason lives. He lives at the beginning of the movie, and is left living in the end.

He will be back. He must be back. Because absurd horror movies are a great way to relieve real world tensions, and there's plenty of tension in this world. So let Jason live, because the horror audience needs to see him die again, and again, and again.

This is the sixth post in a series of Friday the 13th reviews: