I don't care for the movie Carrie, so it's convenient for me to have a movie that brings the story of a reluctant psychokineticist into the world of Friday the 13th. It's even better to make her the next Jason killer.

The story is pretty straight-forward: a teen has suppressed psychokinetic powers, and returns to her childhood home on the shores of serene Crystal Lake. She accidentally frees Jason from his subaquatic imprisonment, and is forced to fight for her life using the very psychokinetic powers she has spent her whole life trying to suppress.

There are some extra plot points added here and there, for added effect. The girl's father, for instance, plays a particularly poetic role, although I'm not convinced it works for as well as the filmmakers intended. There's also a house full of rowdy teens next door, and they're exactly what you'd expect: there's the nerd, the vixen, the awkward and innocent one, the happy couple, and so on.

Given that the main weapon wielded in this movie is basically magic, this obviously continues to elevate the battle against Jason into the spiritual realm. As such, only the occult can be effective against him. The nice thing about moving in this direction is that it's not a point-of-no-return. The filmmakers have hardly exhausted all options in battle scenarios, even though you would think that bringing in an effective superhero would be the peak of epic battles. It's a clever false peak to have reached, and one that's at least matched in following movies.

The reason the telekenesis gimmick works so well, I think, is the same reason magic and psionics works in D&D. The hero gets an opportunity to think up clever uses for the environment around her enemy, and then manipulates the environment with nothing more than an intense, hate-filled stare. Inanimate objects spring to life and, in a Rube Goldberg series of events, deal extreme damage to an apparently indefatigable foe. The enemy goes down, and for those few moments of victory, we feel a collective rush of pride. 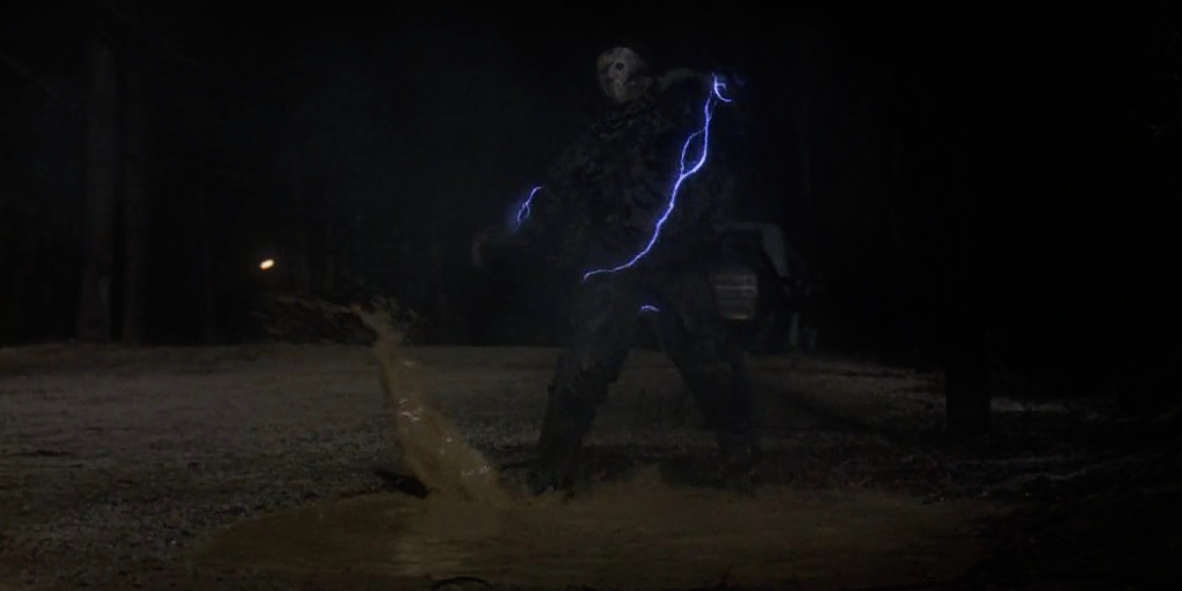 And then the monster gets up again, and makes his move, sparking in us renewed panic and fear.

It's a rollercoaster formula that's pretty difficult to achieve within the bounds of realism, but whatever Friday the 13th may have had in earlier films (and that's not much) has been proudly abandoned by this time, so these tricks are in the rulebook. They aren't surprising to us, but the flavour always is. Will the Jason killer be a dream warrior? a psychokineticist? a really angry and determined woman? or something else entirely? We never can tell, from film to film, and so we keep coming back for more.

And when Jason's the enemy, you can be sure he'll be back for more, too.