Call me a traditionalist or call me sentimental, but I tend to prefer the Friday movies set in the campgrounds of Crystal Lake. So you might think, as I did, that taking Jason out of the woods and putting him in a metropolitan setting invites a lot of whacky "only in New York!" opportunities, and strains the bounds of his motivation. After all, with millions of people to kill, how could a plot around a few threatened individuals possibly work?

The answer is complex, but it starts with the fact that Jason doesn't actually make it to Manhattan until 64 minutes into the 100 minute film. So the title of the film (atrocious as it is) really only refers to less than 40% of the running time.

In fact, most of the film is set on a cruise ship. 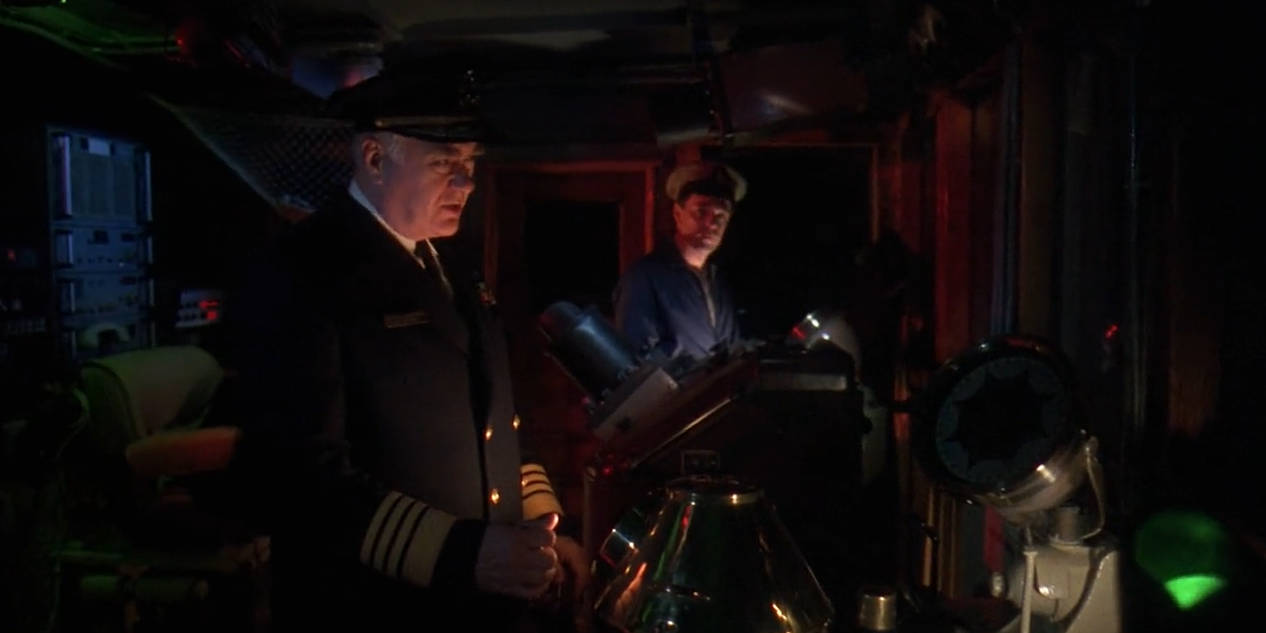 A group of teens go on a graduation cruise from Lakeview (where ever that is) to Ellis Island (where the Statue of Liberty stands) and end up fighting for their lives when they discover Jason's on board. This setup succeeds where Part 5 faltered. It has the isolation and helplessness of a remote campsite, only it's a boat, and the cast members are mostly crazy kids or dumb adults, each prone to a unique level of annoyance. It's the Friday formula, safely adjusted for a specific setting.

The story mostly concerns a girl, Rennie, with an unspecified trauma in her past. She bravely boards the boat despite her foster father's advice, but it's made clear that she's not fond of boats or great bodies of water. The story proceeds as you would expect, at first: a quiet murder here and there, fun and games otherwise. The murders continue, and soon it's evident that none other than Jason Voorhees is on the cruise.

A small band of survivors reach New York and are assaulted by street thugs, who are in turn assaulted by Jason Voorhees. It's oddly gratifying to see the mean streets of New York "cleaned up" by Jason, but the victory is short-lived, because doesn't lose sight of his prey. It's a little reminiscent of the motorcycle gang of the Part 3, and how big problems are sometimes solved by an even greater problem: Jason. 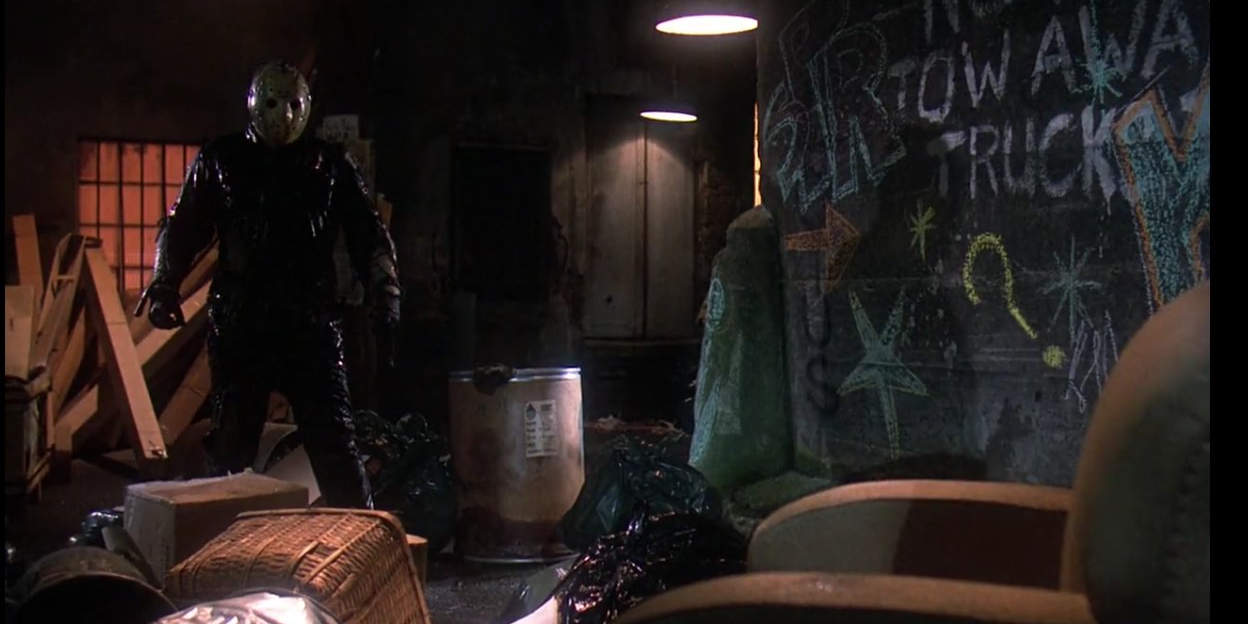 In the end, Jason perishes and, evidently, reverts to the youthful form of the child who drowned, or not, so many years ago. It's a strange ending that, given the lies contained in the back matter of all Friday the 13th films, I'm not sure we're meant to take literally. But it serves its dual-purpose potential: it wraps up this film nicely, and leaves enough of a puzzle for yet another sequel.

As Jason killers go, Rennie is probably one of my favourites. Her back story comes across as melodramatic at first because it's kept hidden, so you just assume she's meant to be a slightly disturbed, fragile girl who will either die in the first 10 minutes or else find the inner strength to survive. As more of her story is revealed, though, it's an interesting twist on the Friday mythos, and somewhat brings ito focus the idea that Jason's targets are most often anyone touched in some way by some Crystal Lake experience. Anyone nearby is collateral damage, maybe as Jason narrows his search for the one or few people whose blood he's really lusting after.

This also helps explain why Jason, in a city with millions of people in it, walks right past hundreds of citizens without killing even one of them, hunting instead the first group of targets he encountered in the movie. Apparently, Jason has priorities.

Rennie, it is eventually revealed, had a close encounter with Jason in her youth. So she and Jason have a history, of sorts, and once Rennie comes to terms with that, she turns into a fierce and belligerent survivor. It's powerful and energizing to witness. Her determination and resiliency is matched only by Jason himself, or at least almost.

Rennie's story plays havoc with the timeline, actually. I can only assume that the Friday universe is a pocket universe within our own, because this movie was released in 1989, but Rennie's encounter with Jason was during the time he was chained underwater in the lake. Rennie is graduating from high school, so she must be at least 17 years old, and she was probably 10 when she got dumped into Crystal Lake and came face to face with Jason. Assuming her expe rience was within the same year he was trapped, then in 1 year of real time there was at least 7 years of Friday time.

The same goes for the gap between Tommy Jarvis's first appearance and his second. And there were at least 5 Friday years between the original Friday the 13th movie and Part 2. That means that the Friday timeline is at least 19 years ahead of our own, making the main events of this movie take place in 2010 or so.

There are also a few self-referential moments in this film. One is pretty blatant: Jason arrives in Manhattan and immediately encounters a billboard advertising a hockey league with a larger-than-life hockey mask. Jason even appears to break the fourth wall, looking in the direction of the camera, although he then walks in the same direction, so you can overlook his glance at the audience as just a natural process of changing directions.

Another one happens in a subway train. (Graffiti in the lower right of this frame reads "Jason Lives".) 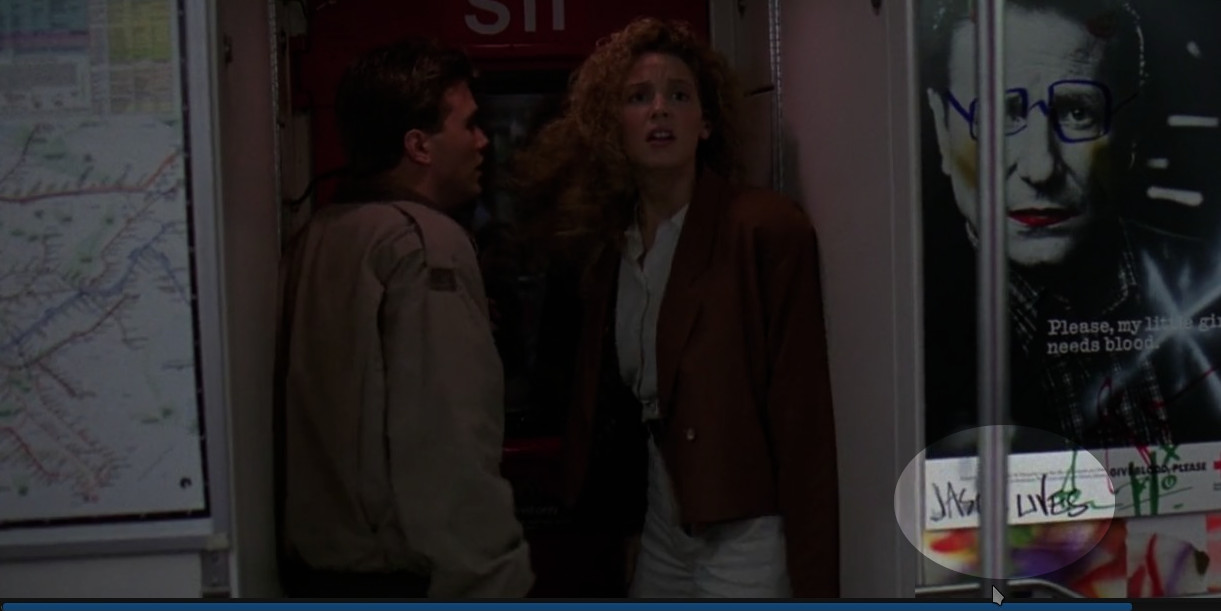 There's a lot of graffiti in this movie, so who knows what else is hidden in cryptic script.

Between the title, the premise, and the fact that it's the 8th movie in a series of movies based on the same formula, this movie is maybe surprisingly good. Or, if you're a fan of Friday the 13th, maybe it's not a surprise at all. Jason is a legend. He's not a terribly interesting legend, and yet the people who encounter him are addictive. We seem to forever want more. And why not? It's not like Jason is going to die and get dragged down to Hell any time soon, right?

Next month, I'll take a look at Part 9 in the Friday the 13th series: Jason Goes to Hell.